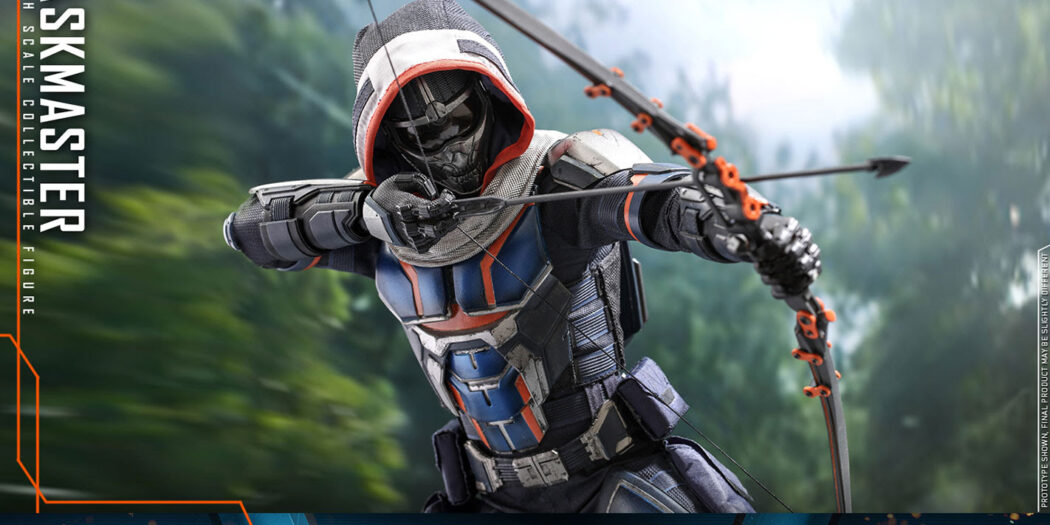 One of the main villains from the Black Widow movie, the Marvel Cinematic Universe version of Taskmaster has a Hot Toy coming up.

Okay look, there’s no getting around the fact that Taskmaster’s introduction to the MCU wasn’t the most faithful of on-screen translations. And quite honestly I think fans had come to expect more from the franchise. But even so, the basic design of the suit was solid.

Sure, Disney MCU’d the look up a bit, but it’s still visually representative of the comic character. And no, I’m not getting into the oddly enacted gender-flip that went on, because Hot Toys didn’t either. That’s to say that there isn’t an ‘unmasked’ portrait included with this new figure, and that’s probably a good thing.

What is included though, is everything else, as Hot Toys adapts the sleek and stylized look of the villain, straight from Widow’s solo film. The figure is coming up very soon too, with a ship window of May/June, 2022. And being that May’s pretty much over, it could pretty much ship any time now.

The assassin known as Taskmaster possesses “photographic reflexes,” giving them the ability to replicate any physical movements that they observe. This unique skill gives Taskmaster a combative edge over almost any adversary.

By adapting a hybrid combat style that replicates moves learned by studying Black Widow — as well as Black Panther, Hawkeye, and Captain America — Taskmaster is a truly daunting foe for Natasha Romanoff.

This highly poseable figure is expertly crafted based on the appearance of Taskmaster in the Black Widow movie. It includes the newly designed helmet and armor, as well as a finely tailored high-tech outfit, and an array of detailed weapons including bow and arrows, circular shield, sword, and more!

As mentioned, the pre-release window for Taskmaster is pretty much over. Pretty much, but not completely. So if you’d still like to slip in a pre-order, you can. Again, Taskmaster is set to ship out before the end of next month, and is priced in at $250 USD.

Jason's been knee deep in videogames since he was but a lad. Cutting his teeth on the pixely glory that was the Atari 2600, he's been hack'n'slashing and shoot'em'uping ever since. Mainly an FPS and action guy, Jason enjoys the occasional well crafted title from every genre.
@jason_tas
Previous Trailer: Insomnis brings first-person survival horror to the PS5 today
Next Trailer: Straight from the 80s, Swords of Fury unsheathes on Pinball FX