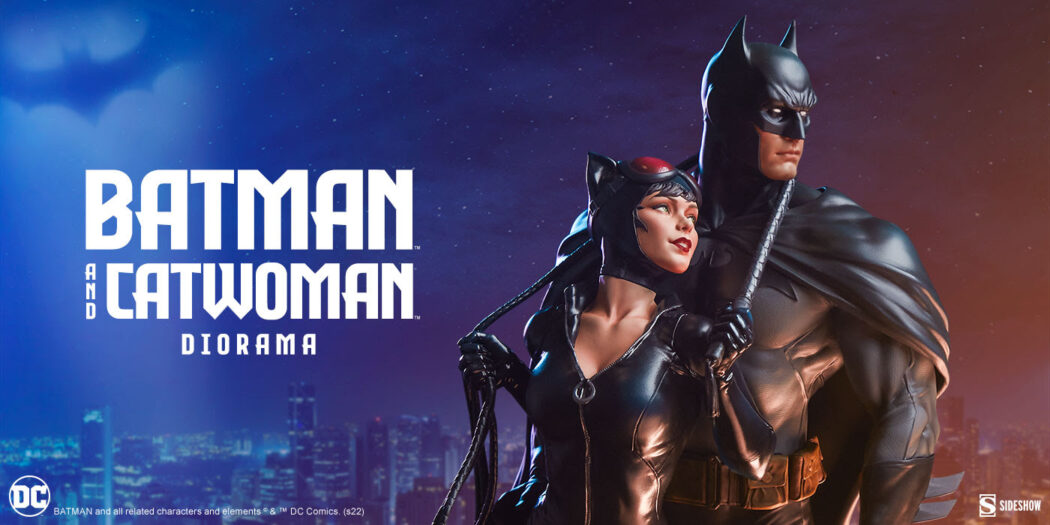 Batman and Catwoman are the subject of Sideshow’s newest piece, a 20″ tall diorama featuring one of DC Comics’ biggest power couples.

The Bat, the Cat…

One of DC Comics biggest pairings, especially over recent years, is easily Batman and Catwoman. The hero and kinda/sorta heroine have shared both storylines and even their own book. Now Sideshow is bringing that relationship into the third dimension, with a brand new statue.

A diorama piece officially, Batman and Catwoman are featured together and have an impressive footprint. The piece will clock in at an overall 20” tall and 9.25” wide. So if Bat-fans are looking for a centerpiece or desk spotlight, this one might fit the bill.

The Batman and Catwoman Diorama is an intricately detailed, fully sculpted polystone statue depicting a Gotham City rooftop rendezvous between the Bat and the Cat. Their body language sizzles with all the sensuality and playfulness that surrounds the relationship of the Dark Knight and his enigmatic companion.

The Batman and Catwoman diorama is available right now for pre-order from Sideshow. It’s priced in at $680 USD, and set to ship in spring/summer 2023.

Jason's been knee deep in videogames since he was but a lad. Cutting his teeth on the pixely glory that was the Atari 2600, he's been hack'n'slashing and shoot'em'uping ever since. Mainly an FPS and action guy, Jason enjoys the occasional well crafted title from every genre.
@jason_tas
Previous Trailer: Skater XL gets some new content with the Tampa Pro Map
Next Trailer: Tactical WWII action arrives on PC with Deadly Dozen:Reloaded