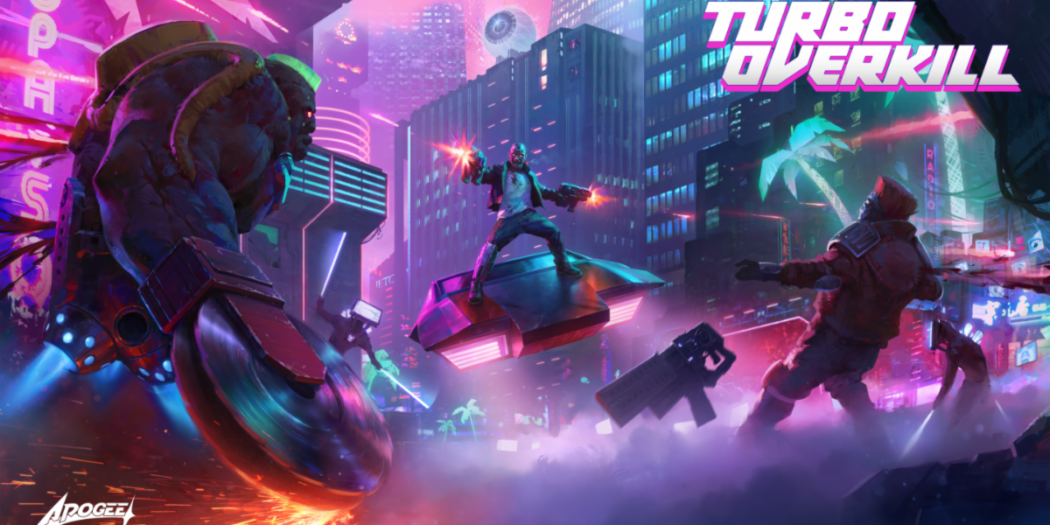 Remember Apogee? The publisher is back in action, and together with Trigger Happy, has an all-out action-fest on PC with Turbo Overkill.

One of the biggest PC game publishers in the late 80s and 90s, Apogee published games like Rise of the Triad, Wolfenstein 3D, and yes Duke Nukem. While the company did release (the original) Prey, it had pretty much dropped off the face of the Earth til recently.

In the last few years though, Apogee has released a few updated classics, as well as an all-new Rise of the Triad. And now that name is back once again, this time with an fresh IP.

Turbo Overkill is a semi-retro FPS that hails from Apogee and Trigger Happy Interactive. And if you remember the first-person shooters of decades gone by, you might want to have a peek.

It’s the far future in Turbo Overkill, and naturally it’s a ‘cyberpunk’ one. Yes, there are a bunch of pretty familiar themes at play in TO’s gritty world, and none of them are likely to shock fans of the genre.

You have your flying cars, you have your grafted-on weaponry and robotic parts, and you have your viruses. Actually, maybe there is a pretty neat little twist to Turbo Overkill’s story, and it comes in the form of Syn.

An AI virus, Syn has begun infecting augmented humans, and twisting them to its will. Shades of System Shock? Maybe a bit, but it’s also a pretty cool element, and one that plays out very nicely in Turbo Overkill’s in-game cut-scenes. Standing against Syn is Johnny Turbo. Yes, Johnny Turbo. Just… go with it.

Johnny heads back to his home city of Paradise, to find this mess exploding on its streets. And like any hardened, cybernetically-augmented badass, he’s gonna take Syn down by any means necessary.

Sometimes that even includes his chainsaw-equipped leg.

One of Turbo Overkill’s more unique elements, Johnny is indeed equipped with a chainsaw in his leg. With a running start, he can pop that saw out and slide right through enemies in a glorious shower of gibs.

It’s way more useful than it might sound, and pretty quickly became one of my favored ways to carve up bad guys. That’s not for lack of cool hardware though, because Turbo Overkill has some great stuff, and each weapon comes complete with an alt-fire mode that can turn the tide of a battle in no time.

Johnny’s twin pistols, for example, can charge up and launch heat-seeking rounds. His Shotgun can be charged as well, and discharge a stunning burst of electricity. And given just how unrelenting and brutal the action is in TO, he’s going to need all that and more.

This game is fast and brutal. If you remember the lighting fast action of FPS’ gone by though, you should be right at home in TO. And even if you don’t honestly, it’s not all that steep of a learning curve. Just be ready to die a lot and restart from a checkpoint. Nope, there are no anytime-saves here.

On the flip side though, the game offers upgrade systems. So much like in almost every big-studio title that sees release these days, you can upgrade Johnny and his weaponry as you play.

For some reason, I was under the impression that Turbo Overkill was a ‘retro’ FPS. You know what I mean; a game that’s made to look like it could have seen launch some time in the 90s. PC gamers have sene a bunch of those recently, but that’s really not the case here.

While there are definitely parts of TO that look crafted to reflect older games, in effect it’s got a kind of mixed presentation. I feel pretty comfortable saying you won’t confuse it for something from 1996.

Yes, the game will throw some retro-ish baddies at you for sure, but it also has some shockingly cool lighting effects. And on a larger scale, there are some really excellent looking environments happening here too (though those tend to mix it up).

When paired together, all of this adds up to a wholly unique visual experience. It has that 90s feel to it, but at the same time manages to look fairly current-gen. Pretty slick honestly.

I’ll add that the music is mostly great too. It’s exactly what you’d expect from a ‘cyberpunk’ title, and hits the nail firmly on the head in that way. While you probably won’t be humming the game’s tunes afterwards, you’ll likely enjoy it just fine while you’re playing.

While I really liked TO’s design sense though, it might not be your cup of Joe. If you want a modern-looking FPS, this isn’t it. And also, if you’re looking for pure retro, this isn’t that either.

Turbo Overkill has a lot going for it. And if you like classic FPS’, I think there’s a good chance you’ll dig it. It does have its little issues though.

Mainly that’s because it’s not completely stable. I had to restart my computer after I installed in order to get the game running, and it also crashed a number of times. But hey, that’s Early Access. TO isn’t technically out in retail form yet, and you have to expect a few little bumps in the road til it gets to that point.

I had a ton of fun with this one though, even with the issues.

Turbo Overkill is probably not what you think. Apogee and Trigger Happy's FPS is a nod to the classics of the 90s for sure, particularly with its gameplay, but it mixes in some modern looks as well, and does so with style. Just be warned, this is an Early Access game still, and it's not 100% stable. So if you're bothered by that, you might want to hold off til it's final.

Jason's been knee deep in videogames since he was but a lad. Cutting his teeth on the pixely glory that was the Atari 2600, he's been hack'n'slashing and shoot'em'uping ever since. Mainly an FPS and action guy, Jason enjoys the occasional well crafted title from every genre.
@jason_tas
Previous Trailer: Monster Trucks unleashed in Hot Wheels Unleashed
Next Check out an in-depth look at Hot Toys’ upcoming 1:6th “Tumbler” Batmobile