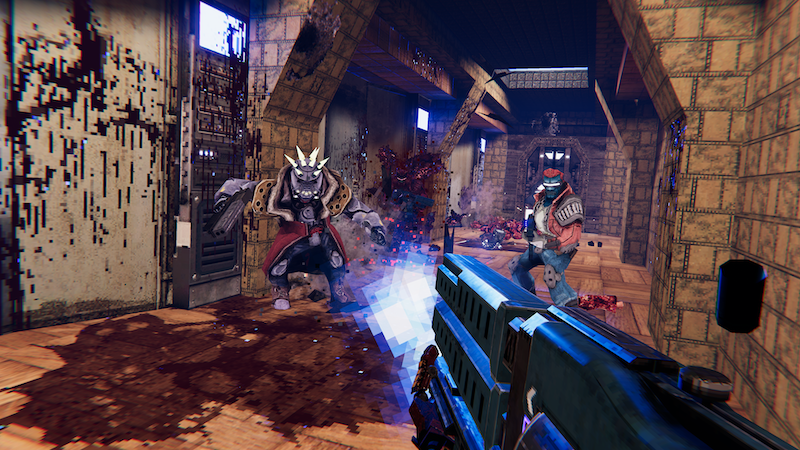 Retro-styled FPS’ are fast becoming a genre unto themselves, and one of the best-looking examples of it is about to land on PC. Here comes Turbo Overkill.

Now, to be fair, this isn’t really a ‘retro’ FPS in the strictest sense. While Apogee’s Turbo Overkill does have some retro themes, it looks like a fairly modern game.

One look at the trailer below will tell you that. While it might not exactly look like a ‘2022’ game, it definitely could have been a game that debuted in recent years. PS360 era maybe?

What it also has in spades though, is ridiculously fast action. And yes, that’s pretty retro, when you get right down to it. Have a look…

Dash and car surf across eight vibrant, secret-packed levels with firepower and chainsaw leg power to spare. Inspired by retro shooter classics like DOOM and Quake with modernized movement, controls, and acrobatics, TURBO OVERKILL takes the fight to a rogue AI bent on dominating a futuristic cyberpunk city. The gates of Paradise are open. The bloody, bullet-riddled road to 1.0—a full multi-platform release across PC, Nintendo Switch, and PlayStation and Xbox consoles—begins here.

Yes, as you can see, Turbo Overkill is indeed coming to more than just the PC. That’s in the future though, since this is just the first appearance of the Early Access version of the game, with episode 1. Expect it to be updated to a total of 3 episodes before it officially sees a final version.

When that might be, we don’t know, but that first episode is hitting this month, on April 22nd, 2022.

Jason's been knee deep in videogames since he was but a lad. Cutting his teeth on the pixely glory that was the Atari 2600, he's been hack'n'slashing and shoot'em'uping ever since. Mainly an FPS and action guy, Jason enjoys the occasional well crafted title from every genre.
@jason_tas
Previous Trek to Yomi dated, traveling to consoles and PC in May
Next WWE 2K22 (Xbox Series X|S) Review