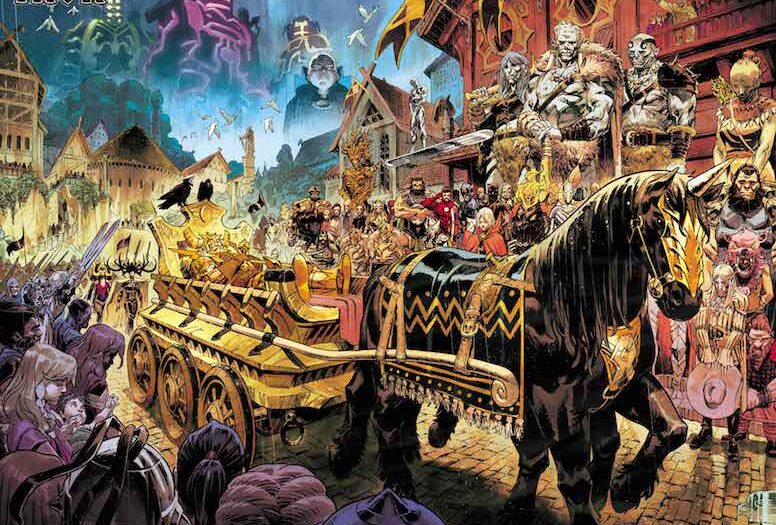 The (overall) 750th issue of Marvel Comics’ Thor will be a packed one, with plenty of major happenings, and a few returning favorites on the creative end.

The wake of the “God of Hammers” story-arc will be the setting for Thor #24. That is the official number of what will be the overall 750th issue of the thunder god’s continuing adventures in the Marvel Universe. And it’s gonna be one packed book.

After the close of God of Hammers, Thor’s world is in turmoil. For one thing, his trusty uru mallet Mjolnir is gone, shattered. And for another, his father Odin, lord of Asgard, is dead. Well… maybe. Maybe not.

As things go, Odin’s spirit has been bonded to a newly reforged hammer. though in Thor #24, no one actually knows that. Yes, it’s a tale with some mystery, which is fitting for the title hero.

But while echos from Thor’s past will still be heard loudly as the book moves forward, so to will echos of creative teams past. Marvel says that a number of Thor-alumni will feature in issue #24, Dan Jurgens and the great Walt Simonson.

Jason's been knee deep in videogames since he was but a lad. Cutting his teeth on the pixely glory that was the Atari 2600, he's been hack'n'slashing and shoot'em'uping ever since. Mainly an FPS and action guy, Jason enjoys the occasional well crafted title from every genre.
@jason_tas
Previous The Purge of Mandalore comes to life courtesy of Hot Toys’ KX Enforcer Droid
Next Classic 80s IP Robo Force on the way back thanks to The Nacelle Company