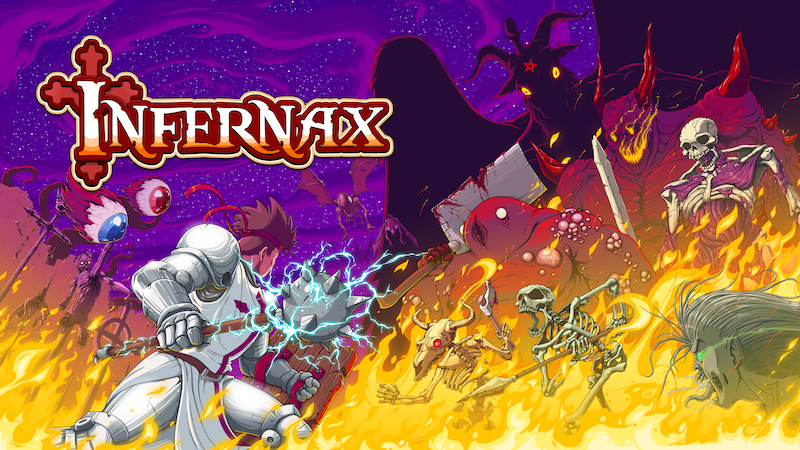 A classily-styled Metroidvania, Infernax takes elements from those addictive adventures, and adds in plenty of blood, gore, and fun.

If you were playing video games back in the 8bit days, then you know all about the specific kind of magic that the NES offered up. Sure the graphics were simple by today’s standards, but games like Metroid and Castlevania were pure gold, through and through.

Those classics were loaded up with stylish looks, cool heroes and villains, lengthy quests, and tough-as-nails difficulty. Back then of course, being a hard-to-beat game wasn’t something to complain about. It was instead something to master, and take pride in completing.

From The Arcade Crew and Berserk Studio, Infernax looks to replicate a good deal of that feeling. The difference being that it amps all of it up, adding some modern design to the classics. It succeeds for the most part too, and in gory fashion.

We need a hero

When Infernax opens up, we find that young Alcedor has returned to his kingdom of Upel. And it kind of is his kingdom too, as he’s the Duke of this particular land. Alcedor is a fighting Duke however, and has returned after a long stint away, battling in the Crusades.

But if respite was what he was searching for, he won’t find it in this now cursed land. Alcedor is immediately beset by monsters and demons, who have dominated the countryside in his absence and sieged his people.

Actually, he’s immediately beset by a moral choice too, which is the first of many that you’ll make as you play Infernax. But more on that later, as morality is a great element that’s been added to the game’s tried-n-true mix. But for now, let’s get back to the story.

While it’s not the deepest tale, Alcedor obviously has to figure out what’s happening to his lands and defeat the villainous monsters. And that’s the basic tale that Infernax tells, though there are lots of sub-quests too. No this isn’t your daddy’s Metroidvania, as there are lite RPG-ish elements to it that include lots of optional adventuring.

One of the biggest things that a “retro” title can get wrong is gameplay. The classics of old had precision play aplenty, and it’s necessary if you’re going to have a game that throws lots of enemies at the player, and can deal out serious pain.

Thankfully Infernax gets this right. Alcedor can issue plenty of damage himself, thanks to that mace, planting it in the foreheads of many a monster. Additionally, he has access to magic fairly early on in the game, and can do all of the above with ease. Not that this is an easy game.

Infernax, if you haven’t gotten the drift yet, is pretty hard. That’s especially true at night, as the day/night cycle amps up the difficulty a bit when it gets dark. There are two difficulty settings by the way, so you can turn down the toughness if it’s too much for you. But keep in mind that this is a game that’s meant to be hard. That’s honestly part of the fun.

Even though I died a ton and a half, I never had the sense that Infernax was a slog. Instead I found that it has that vaunted ‘one more try’ feel. Yes, you died again, but starting over at a nearby save-point and being back and kicking ass is just so much fun that you might not care (much).

I also want to touch on the level of ‘choice’ that you have in this game. It’s not overdone, but Alcedor is a leader, and has to make moral choices at times in Infernax. One of the very first things that you do in the game showcases this. Kill a man infected by evil and someone will see that you took out what looked to be a random traveller. Don’t kill him and he’ll turn into a gigantic beast giving you an early headache. It’s very cool stuff.

Also very cool is that Infernax doesn’t shy away from blood and gore. It might look 8bit(ish), but don’t let that fool you. This game is covered with the red stuff, and swinging that aforementioned mace will result in lots of bloodied creeps.

One of the first bosses that you’ll face, just to show you an example, gets partially gutted in the fight. The giant demon then stumbles off, and Alcedor has to track it by following its bloody trail.

The gore doesn’t stop when you get killed either, as each death will result in a brutal, silhouetted scene. Die via a spear-tossing wall-mounted weapon? You’ll see Alcedor knocked back and perforated. Miss your shot and have a skeleton bury an axe in your head? Well get ready to see that skull-head absolutely go to work. These fatalities are a little bit of rubbing it in that you lost, but it’s also pretty fun, and at times funny as well in their overkill.

While I liked all of that a lot, and the detail on the monsters is great overall, I do have to add that the game’s locations are a little generic. There’s nothing particularly unique about most of Upel. While we’re at it, the sprites are also a little on the small side.

That scale does lend itself to having big boss and sub-boss characters, and Infernax uses it to some solid effect. Nonetheless, I’d have liked to have seen some bigger standard enemies and for Alcedor himself to have been a little larger. While the game is nicely detailed, this could have allowed for even more. Though on the flip side it might have further diminished the 8bit aesthetic.

If you like the classics of the 8bit age, I have a hard time believing you couldn’t find something to love here. Infernax flat-out excels at recreating so much of what made the genre greats so much fun.

Infernax immediately recalls the past era of 8bit action titles, but builds on that like crazy. The game features great controls, a cool quest filled with optional side-tracks, and solid looks. If you're into horror and classic Metroidvanias, it's definitely worthy of your time.

Jason's been knee deep in videogames since he was but a lad. Cutting his teeth on the pixely glory that was the Atari 2600, he's been hack'n'slashing and shoot'em'uping ever since. Mainly an FPS and action guy, Jason enjoys the occasional well crafted title from every genre.
@jason_tas
Previous WWE 2K22 showcases My GM mode in new videos
Next Nintendo Download: “Mist”-erious and Puzzling Adventures Ahead