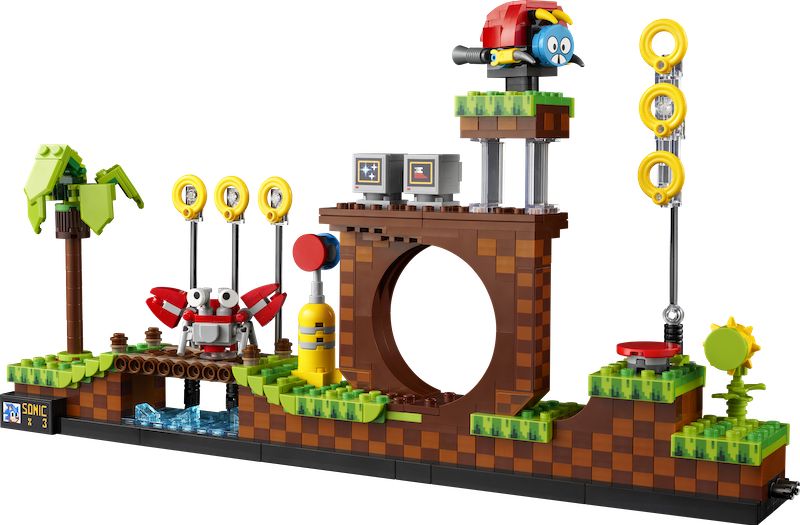 Sonic the Hedgehog has a brand new LEGO set, out right now

Gotta go fast… to the LEGO Store, to pick up the brand new, and exclusive, Sonic the Hedgehog set. The Green Hill Zone is out now.

Are you familiar with LEGO Ideas? If you’re not, then all you really have to know is that it allows fans to come up with their own ideas for LEGO sets. And once their idea is all together, there’s the chance that LEGO might actually take one of those ideas, box it up, and send it to retail shelves.

Over the years, there have been a number of fantastic sets to spin out of Ideas, including some with huge licenses like Back to the Future, Ghostbusters, Home Alone… and Sonic the Hedgehog.

Yes, the latest in the Ideas series stars Sega’s Blue Blur. And, more precisely, it centers on his very first level from way back in 1991, the Green Hill Zone.

Lots of fun details and easter eggs have been incorporated into the 1,125-piece set including five minifigures – an updated version of Sonic, Crabmeat, Moto Bug, Dr. Eggman and the Phantom Ruby.  Also included are 10 boxes of golden-coloured Rings and a Technic lever to spring Sonic and friends into the air. And just like in the game, you can earn a gem reward as you build the set! This fun-filled LEGO build results in a dynamic display set or one that can be played with by any Sonic or LEGO fan for years to come.

LEGO fan Viv Grannell is a passionate Sonic enthusiast and saw an opportunity to create a dedicated LEGO set. They submitted their design to the LEGO Ideas® platform, a LEGO initiative that allows fans to create designs which are then voted on by the wider LEGO fan community.  The submission reached the required 10,000 votes to be considered by the LEGO team to be made into reality.

Taking on the challenge of turning the concept into a LEGO set was LEGO Designer Sam Johnson. Talking about the set, Sam said; “Just about anyone who has enjoyed video games on any level in the last 30 years, knows and loves Sonic — and has probably sped through the unforgettable Green Hill Zone with him. We have designed this set to be just as colourful and fun as the in-game version of The Green Hill Zone, then filled it with lots of easter eggs and even prizes to help fans enjoy some of their most beloved gaming icons in a brand-new way.”

The Green Hill Zone is out right now, and can be ordered direct from LEGO, at the company’s online shop here. The set is priced in at $69.99 USD.

Jason's been knee deep in videogames since he was but a lad. Cutting his teeth on the pixely glory that was the Atari 2600, he's been hack'n'slashing and shoot'em'uping ever since. Mainly an FPS and action guy, Jason enjoys the occasional well crafted title from every genre.
@jason_tas
Previous Video: Take a deep-dive into the campaign of Company of Heroes 3
Next A new, even more dangerous Hulk evolution is coming to the pages of Marvel Comics