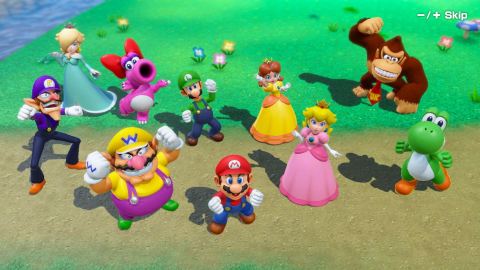 Home / News / Nintendo Download: You’re Invited to the Party of the Year!

It’s party time! Mario Party time, to be precise, as the latest installment of the series makes its way to Switch along with a massive list of other new titles.

Mario Party is one of those series’ that you either love or hate. That’s a weird thing to say about game starring the plumber, but then again it’s a game with Mario unlike any other. And after all, party games are not for every gamer.

This Mario Party too, is even more of an acquired taste, since it’s a collection of previously released mini-games. Nintendo says that classic boards and games from past installments are included here, 5 of them being from N64 Parties.

So if that’s not to your liking, it’s a good thing there’s a ton of other stuff hitting as well. Pokemon Cafe Remix also comes along this week, with Fatal Frame, WWZ, Dusk, and a load of smaller releases.

Jason's been knee deep in videogames since he was but a lad. Cutting his teeth on the pixely glory that was the Atari 2600, he's been hack'n'slashing and shoot'em'uping ever since. Mainly an FPS and action guy, Jason enjoys the occasional well crafted title from every genre.
@jason_tas
Previous Trailer: Supernatural western Weird West coming to consoles and PC in January
Next Dying Light gets new Halloween event, and new DL2 video