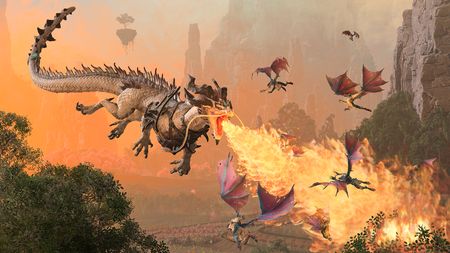 The Chaos god and its underlings are about to run into a force to be reckoned with, as Grand Cathay revs up its formidable war machine.

The Great Bastion:
The Great Bastion is a symbol of everlasting defiance that has protected Grand Cathay from the wrath of the Chaos Gods for millennia. It is a titanic, nigh-impenetrable wall imbued with ancient magic that runs the length of the Celestial Dragon Empire’s northern border with the hostile Chaos Wastes. Made up of three gatehouses, this unique settlement has access to its own building chains, commandments, and can be further bolstered by the great Wu Xing Compass which channels the Winds of Magic to its aid, allowing for greater campaign and battle bonuses.
When defending this great settlement, players can also make use of new features which allow for greater strategic interplay. This includes the ability to construct missile towers and barricades throughout the inner settlement, meaning players can devise devastating kill-corridors should the enemy breach the outer wall.

Tzeentch:
Of all the Chaos Gods, only Tzeentch has found any purchase within Grand Cathay itself, and the Changer of Ways has infiltrated aspects of Cathayan society where the more overt tactics of his brothers have failed. A being unmatched in magical capability and subterfuge, Tzeentch has bestowed this gift upon his minions to wreck-havoc upon the mortal world.
More information about Tzeentch and its Legendary Lord, Kairos Fatewever will be revealed soon.

There’s no release date just yet for Total War: Warhammer III. The game was formerly scheduled for launch this year, but is now expected some time in 2022. Watch for it on the PC.

Jason's been knee deep in videogames since he was but a lad. Cutting his teeth on the pixely glory that was the Atari 2600, he's been hack'n'slashing and shoot'em'uping ever since. Mainly an FPS and action guy, Jason enjoys the occasional well crafted title from every genre.
@jason_tas
Previous Call of Duty gets ready to Scream for Halloween
Next Topps and Mego go round 2 with Phantom and zombie horror figures