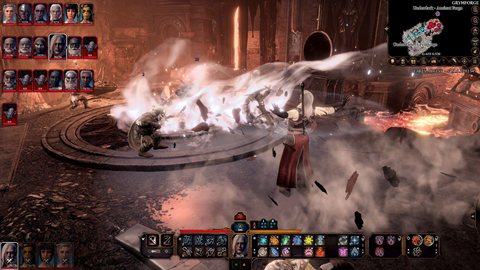 Growing the evolving experience that is Baldur’s Gate III, Larian Studios has delivered Patch 6, with a new area and class to play as.

Two pretty big new inclusions highlight the sixth patch for Larian’s Baldur’s Gate III, the newest and long awaited entry in the RPG series. One delivers a new class to play as, while the other gives gamers even more of a quest, into a whole new area.

Starting with the class though, you’re going to get to cast some spells, as it’s the Sorcerer. While this new class delivers a lot of what you might imagine, they also have a signature ability called Metamagic.

With it, you can increase a spell’s range, duration, or hit two enemies simultaneously, among other powerful variations — making you a powerful and unpredictable presence in battle. Metamagic can be used alongside other casters for devastating effects, and it’s great fun in online co-op multiplayer!

Along with the class itself, there are also a pair of sub-classes. As you’ll see, they’re pretty unique too, especially for a D&D game.

As mentioned, and on top of all that the new class delivers, Larian is also bringing Grymforge to Baldur’s Gate III. An ancient, massive fortress, Grymforge will reportedly provide hours more exploration and action for BG3 players.

Grymforge. A name all but forgotten, but for those taught to fear it. This ancient fortress lurks where the shadows of the Underdark grow bleakest, and where the rivers of magma run hottest. The past and present collide within these sinister corridors, exposing old secrets to new masters, and making harsh demands on all who dare journey there.

Gather your party and cross the Ebonlake to Grymforge. Face new challengers and new choices, each more intriguing than the last. But come prepared: in halls and chambers dark as these, you can’t trust just anyone. You’ve reached the crossroads, adventurer. Which path will you take?

Along with all of that too, there are new weapons, and a monster graphics overhaul included. So if you’ve been playing Baldur’s Gate III, now’s the time to dive back in.

Baldur’s Gate III is out now on the PC, in Early Access form, and patch 6 is live and ready for play.

Jason's been knee deep in videogames since he was but a lad. Cutting his teeth on the pixely glory that was the Atari 2600, he's been hack'n'slashing and shoot'em'uping ever since. Mainly an FPS and action guy, Jason enjoys the occasional well crafted title from every genre.
@jason_tas
Previous Trailer: Crysis Remastered Trilogy arrives on consoles and PC
Next Trailer: Angry Alligator chomps the Switch, out now