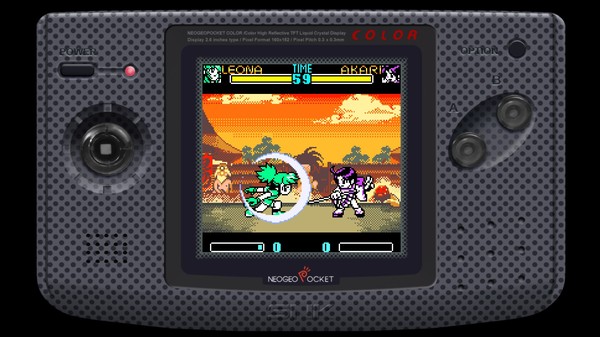 Pocket, but not in your pocket

I guess if you have a Steam Deck (which is allegedly coming up fairly soon), you could technically fit the new edition of the NeoGeo Pocket Color Selection Vol.1 in it. Not that it’d be comfortable, since the Deck is pretty large, but you get the idea.

Kind of a forgotten console, the Pocket Color played host to a bunch of SNK’s biggest series’, though tailored to handheld. So you won’t find a fully featured Fatal Fury, but you will find a cartoony version with a smaller roster of fighters.

All in all, it was a fun little handheld, and it’s great to see the games coming back around for those who missed them. It’s also great to see them branching out, as this new release finds Vol.1 heading to the PC.

So we all know the basic premise of a collection. More or less, they all run about the same in terms of general content. There are a bunch of games (the more the better) and some extras.

Most of the collected editions I have played have seemed to skimp on both, but that’s not the case with the NeoGeo Pocket Color Selection Vol.1. The game includes a total of 10 games, spread out across some of SNK’s biggest and best-loved series’. Those include Metal Slug, Samurai Showdown, and King of Fighters.

But if you’re expecting the exact same roster of titles as the Switch edition, you’d be wrong. There’s a huge difference between the versions, as this PC edition does not have SNK vs Capcom. Instead it includes Crush Roller.

What’s that? Well, it’s a game about road painting… and avoiding monsters. Yep, that’d be a win for the console edition.

Now, the NGP(C) only had two action buttons, so the control suite here isn’t exactly expansive. But nonetheless I’m happy to say that the NeoGeo Pocket Color Selection Vol.1 gets it right.

I had zero issues controlling the games included with my Xbox One controller, or with my Backbone while playing remotely. I did have to map a few buttons, but everything was easy to do and worked well.

It’s nice too, that the collection includes so many different titles, so that you can switch things up as you see fit. Tired of one-on-one combat? Flip over to one of the included Metal Slug games and get some side-scrolling action in.

The NeoGeo Pocket (and the Color variant) was more GameBoy than GBA, so the looks of the games included here are of the simpler kind. All through the line, SNK chose to highlight a more stylized and cartoony look, than what you might be used to seeing from them.

But that’s the charm of these games really. Other than that fact that you could take the games with you, they were something a little different. Now of course, it’s nostalgia that’s the main draw, and in that way these can’t get much better.

I have played a good deal of these on the original NeoGeo Pocket Color, and the PC editions look spot on. Not only that, but they sound great too, and even feature NGP console overlays.

So basically, you can add an on-screen NeoGeo Pocket on top of your game, to give it that classic feel of actually playing the little portable. Even cooler is that there are a number of the console’s aesthetic variations included. So you might be able to find yours (if you had one).

More or less, this is the same collection of NGP titles that you’ve seen already on the Switch. It plays the same and has the same looks and options. Again though, there’s that one big difference in the swap out of SNK vs Capcom for Crush Roller.

For that reason alone, I’d have to recommend the console edition, if you have access to both. If not though, and you’re not overly enthused about the fighting game in question, then NeoGeo Pocket Color Selection Vol.1 for the PC is a solid piece of gaming history.

If you're looking to relive the days of the NeoGeo Pocket Color on your PC, then you have found the collection for you. The NeoGeo Pocket Color Selection Vol.1 includes a set of 10 games that almost all spinoff from iconic SNK series'. The pack looks great, played fantastic, and has some cool little additions. The only downside? SNK vs Capcom has been swapped out from the console version, for Crush Roller.

Jason's been knee deep in videogames since he was but a lad. Cutting his teeth on the pixely glory that was the Atari 2600, he's been hack'n'slashing and shoot'em'uping ever since. Mainly an FPS and action guy, Jason enjoys the occasional well crafted title from every genre.
@jason_tas
Previous Trailer: Guardians of the Galaxy gets a final look before launch
Next Nintendo Download: Sora Joins the Ranks of Super Smash Bros. Ultimate