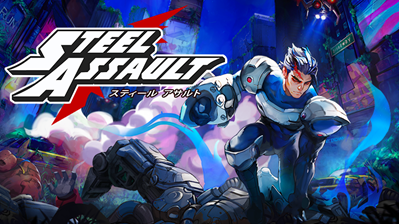 Landing on the Nintendo Switch later this month is Tribute Games’ Steel Assault. If you remember the 16bit era fondly, this one looks like it’s for you.

Just hold down the fire button

Published by Tribute Games and developed by Zenovia Interactive, Steel Assault is a fast-paced, action-packed, 2D platformer in which players punch, whip, and zipline their way through a post-apocalyptic America. It offers a true ‘90s arcade game experience thanks to challenging gameplay tailored for a 4:3 screen resolution with optional arcade bezels. Players will be able to experience the game on “retro hard” or tone it down to a more casual platformer with a variety of different difficulty options.

Steel Assault launches on the Switch on September 28th.

Jason's been knee deep in videogames since he was but a lad. Cutting his teeth on the pixely glory that was the Atari 2600, he's been hack'n'slashing and shoot'em'uping ever since. Mainly an FPS and action guy, Jason enjoys the occasional well crafted title from every genre.
@jason_tas
Previous DC Comics outlines December headliners, with Batman, Krypton, and the new One-Star Squadron
Next A double dose of Metal Slug action, out now on Switch