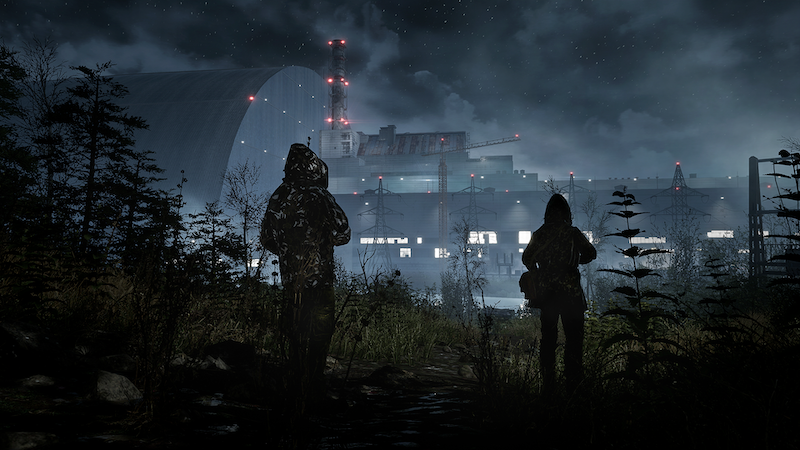 Decisions, decisions. Choose your own terror in The Farm 51’s gorgeous FPS/RPG Chernobylite, a well crafted fright-fest (almost) all around.

Chernobylite is an excellent game, from the sudden introductory sequence, to the middle portion of its narrative, and all the way to the end. It’s been a hell of a ride and I have never been more satisfied with a somewhat similar post-apocalyptical game since Fallout 3.

The main difference with Chernobylite however, is its extremely robust choice system. As you play, it actually feels like you’re changing something within the world of the game.

I’ll say this now, I highly recommend Chernobylite to anyone who wants to play a roleplaying game and get immersed in a world that’s like our world and at the same time… different.

Chernobylite’s plot is straightforward. The main playable character Igor is a physicist and former Chernobyl (the real-world nuclear plant -ed) employee. He returns to the site a few years later only to find out that something is amiss. Dimensional hijinks ensue and things start to go very wrong for Igor and his crew. Did I mention that his missing wife constantly talks to Igor inside his head?

The game is effectively a survival horror game, but it doesn’t overuse monsters, jump scares and cheap tricks – and this actually makes everything more terrifying when those things do start to happen.

A lot of the characters’ fates and the actual progression of the game is dictated by the choices that you make, whether through a dialogue option or a physical action within the world of Chernobylite. You can sometimes choose to kill something a certain way only to find it biting you in the backside a few hours later – the choice and consequence system is that robust.

The base building aspect of Chernobylite was quite fascinating for me as a fan of farming for materials and designing my own home. The choices remind me of Fallout 4 and hunting materials made me decently satisfied. What’s not good however, is how the placements don’t seem to want to cooperate at times. Though that’s probably my own fault anyway.

I haven’t seen or experienced any game breaking bugs during my playthrough so I’ve come to realize the horrible things that happened to me during my initial Chernobylite run was my fault entirely. And I love that about this game.

This is where Chernobylite shines the best. The game simply looks amazing. I’ve read some articles and press releases that a lot of Chernobylite is 3D printed from the actual site itself and I guess it shows because of how beautiful the game looks on a PC that can run it.

The characters look like real people and not just actors paid to be 3D scanned. Likewise the weapons and gadgets all look realistic and fun, and not like cheap plastic toys.

All in all, Chernobylite is every bit a modern game in the looks department. It features well made graphical design and feels authentic. You feel like you’ve stepped foot in Chernobyl yourself, and it is an experience loaded with detail.

The footprints that you leave, your visible breath in the cold and Igor’s panic are all reflected in the excellent game design. This would have been one of the best games I’ve played this year… had it not been for the horrible English dub. I’m not sure if it’s the fault of voice actors or the voice director, but the English dub is just clearly a step behind the seemingly excellent Russian dub. Though who knows, that is probably of the same quality anyway. I don’t speak Russian.

But back to the good stuff, because the first-person element of Chernobylite really brings out the excellent graphical design. It helps bring to life the gray and dreary Chernobyl. I will add that the combat is a bit bland to my taste, but it isn’t horrible by any means.

At least moving around Chernobyl is fun thanks in part to how excellent the graphics look and how satisfying exploration is in this game.

All in all, Chernobylite is a good game that you will spend hours and hours playing on your own. But you might want to also stream it to your friends over Discord (which is what I did) because the beauty of this game is that it’s more fun when you have an audience.

On the technical side, the controls are pretty standard and the gameplay is workable enough to be seen as passable. The graphics however, are excellent, something that makes up for quite a bit for me.

I highly recommend Chernobylite and if you want a gripping survival horror game with exploration and a choices system then this game is for you.

The Farm 51's Chernobylite is an attractive game, and one that tries its hand at a lot. There's base-building and weapon crafting, and RPG elements and FPS action... it's a lot. And most of that comes off well, though I think it's fair to say that some of it is a little rough around the edges.

Tags All In! Games Chernobylite The Farm 51