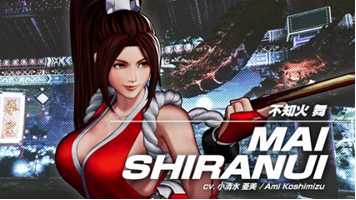 Still a ways off with a Q1 2022 release planned, SNK’s next King of Fighters is nonetheless looking great, and packing some heavy-hitting female heroes.

Not one, not two, but three of SNK’s female heroes will be joining forces for King of Fighters XV. The furious-femmes will be teaming on a brand new squad for the series, dubbed Team Super Heroine.

ATHENA ASAMIYA
Athena is a high-school pop idol fighting evil to bring about world peace. Her fighting style is composed of the psychic powers she was born with and Chinese Kung Fu. She is a hard worker, both polite and serious. However, this KOF she’s unexpectedly teamed up with Mai and Yuri…?

MAI SHIRANUI
Mai is a kunoichi and successor of the Shiranui style of ninja arts. Her opponents are at the mercy of her graceful movements and fascinating attire. Using large fans as weapons, her fighting style is to “float like a butterfly, sting like a bee”.

YURI SAKAZAKI
Ryo Sakazaki’s younger sister managed to learn deadly techniques in less than one year after joining the Kyokugenryu Dojo. As a fighting genius, Yuri has brought her own personal touch to the martial art. She joins this KOF to once and for all prove her strength to her brother.

Stay tuned, there’ll be lots more to come in respect to King of Fighters XV, as the game isn’t set to arrive till the first quarter of 2022.

Jason's been knee deep in videogames since he was but a lad. Cutting his teeth on the pixely glory that was the Atari 2600, he's been hack'n'slashing and shoot'em'uping ever since. Mainly an FPS and action guy, Jason enjoys the occasional well crafted title from every genre.
@jason_tas
Previous Trailer: Port Royale 4 goes next-gen with new update
Next Prime Gaming deals Indiana Jones, Battlefield and more for August