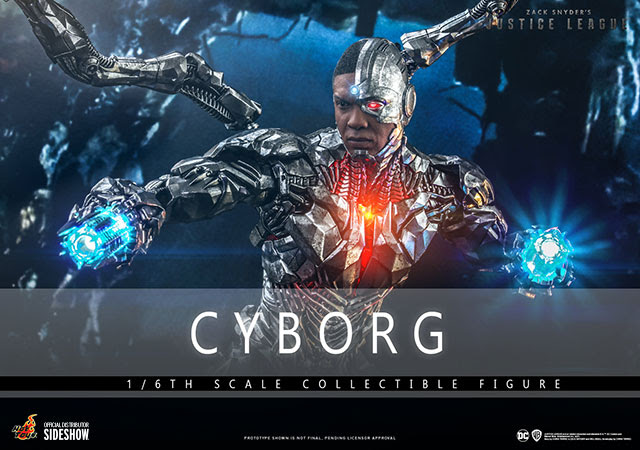 A pair of new DC Comics’ figure are set to join Hot Toys impressive lineup of 12″ scale collector figures, with Cyborg and Batman in his XE suit.

We’ve been showing you a lot of related Hot Toys releases as of late. You know, multiple figures that are from the same shows or movies? In this instance though, we’ve got a pair of upcoming DC Comics launches that are really not associated with each other at all. Well, other than the fact that they’re both pretty slick figures that is.

First up is none other than the Justice League powerhouse Cyborg. This version of Vic Stone is from Zach Snyder’s Justice League movie, and features the likeness of actor Ray Fisher.

In addition to the standard, there’s also a special edition. Both figures have light-up features, interchangeable parts, and a brand new 1/6th scale body. Hot Toys latest offers up the same scale and level of sculpting that you’d expect, but with 30 points of articulation.

Oh, and as for what makes that “special edition” so special, it’s a second head. A masked portrait is included right along side Fishers’ face, as a second posing option.

In from the cold

As for the second new announcement from the company, it’s a figure that reaches fairly far back. Batman: Arkham Origins is, in some ways, the black sheep of the “Batman: Arkham” family.

It’s not a part of the mainline series, which is widely recognized as a trilogy. It’s also not from developer Rocksteady, instead having come out of WB Games Montreal, and features a story that’s maybe a little smaller than the other games’. Personally, I don’t care about any of that, and I loved Origins. I actually liked it a heck of a lot more than Arkham Knight. But that’s another story, and we should probably get back to this figure.

Hailing from the Mr. Freeze-centric expansion for Origins, this figure portrays Batman in his XE suit. Constructed to combat Freeze’s specific power-set, the XE suit has a unique look for the Dark Knight.

It’s heavily weathered, in terms of detailing, and comes with both a bunch f game-specific accessories, and an awesome stand. Batman is also sporting a bendable cape, which is always a nice bonus in a Batman figure.

As with the Cyborg figure, there’s a special edition here as well. That includes Batman’s Cryptographic Sequencer, which any fan of the title gaming series should recognize pretty fast.

Jason's been knee deep in videogames since he was but a lad. Cutting his teeth on the pixely glory that was the Atari 2600, he's been hack'n'slashing and shoot'em'uping ever since. Mainly an FPS and action guy, Jason enjoys the occasional well crafted title from every genre.
@jason_tas
Previous Prime Gaming deals Indiana Jones, Battlefield and more for August
Next The Transformers: The Movie rolling out back to theaters