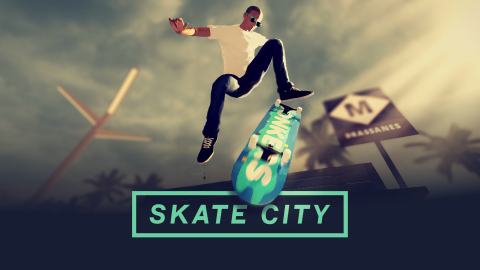 No, it’s not time for Tony Hawk just yet, but Skate City does arrive this week on Nintendo’s Switch. What’s that? A surprisingly slick looking skater actually.

Oh my is skating back on the video game grid. There’ve been a few titles to feature the sport in the last couple of years, headlined of course by the rebirth of Tony Hawk’s Pro Skater.

That’s a game that’s coming to the Switch in June, but if you just can’t wait, then you might want to check out Skate City. A very different looking title thank THPS, SC nonetheless is looking kinda neat, sporting an animated look.

If though, you’re not into skating, you won’t find much this week in the Download. The Switch’s weekly online shop update is only featuring this title, with no other headliners. And while there are a bunch of smaller releases, as usual, none of them are all that iterating IMO.

Jason's been knee deep in videogames since he was but a lad. Cutting his teeth on the pixely glory that was the Atari 2600, he's been hack'n'slashing and shoot'em'uping ever since. Mainly an FPS and action guy, Jason enjoys the occasional well crafted title from every genre.
@jason_tas
Previous Trailer: MicroProse’s new FPS Ground Branch gets tactical
Next Trailer: Metro Exodus returns in enhanced form for PC