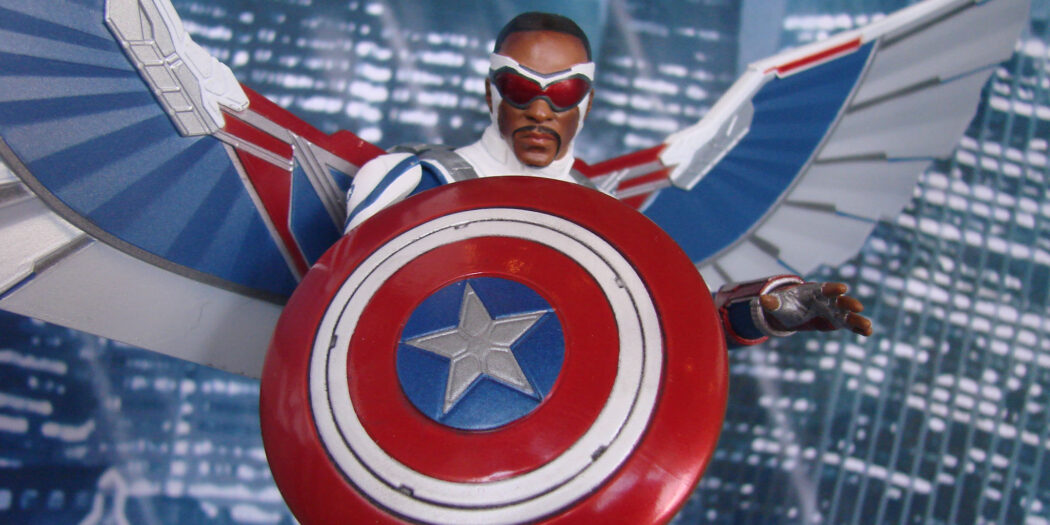 Diamond Select Toys has a pair of Disney-exclusive Marvel Select figures ready to go with the Disney+ version of FalCap and a comic book Bucky.

So this is a little bit of a weird pairing, since we’re not talking about two MCU figures. Yes, it’s Sam Wilson suited up as Captain America and yes we get a reissued Winter Soldier. Only Sam is from the Disney+ TV series though, as Buck is decidedly comics-based.

Bucky is also a reissue of an earlier release. It’s good to see him coming back around though, as it’s a great figure. So if you missed him the first time, here’s your chance.

The Winter Soldier has a rich comic-book history, and now his comic-based 7-inch figure makes a heroic return to the Disney Store! Featuring an all-new paint scheme inspired by the Disney+ TV show, Bucky sports 16 points of articulation and an array of weapons, including a pistol, machine gun and sniper rifle. Plus, he comes with a diorama environment of a sniper’s perch, including a removable Hydra crate!

On the other hand, Sam is all new and looking fantastic. Falcon’s version of the Captain America costume really looked great in the Disney+ show, and it comes to life beautifully here in action figure form. Nice and bright red, white, and blue.

Sam Wilson, a.k.a. the Falcon, steps into his all-new Captain America uniform at the end of the series, and now that look is a Marvel Select! Capturing the comic-inspired red, white and blue outfit, this 7-inch figure includes detachable wings, a shield, a Redwing drone, and six interchangeable hands. It also features 16 points of articulation!

Both figures should be available now on shopdisney.com, along with a slate of additional Diamond Select action figures.

Jason's been knee deep in videogames since he was but a lad. Cutting his teeth on the pixely glory that was the Atari 2600, he's been hack'n'slashing and shoot'em'uping ever since. Mainly an FPS and action guy, Jason enjoys the occasional well crafted title from every genre.
@jason_tas
Previous May’s Games with Gold brings Batman, Tropico, and more to Xbox gamers
Next Doom Eternal collectible figure line coming up from Numskull