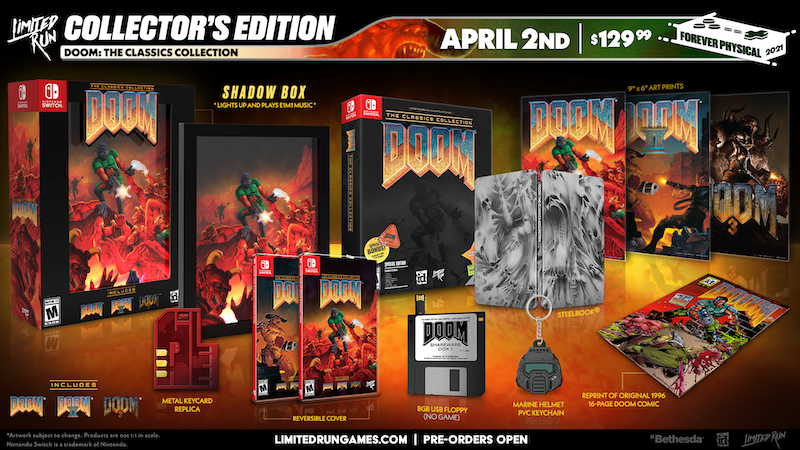 The core Doom universe (multiverse?) of pre-Doom 2016 titles is being bundled in a gorgeous new set of collected editions on Limited Run Games.

If you haven’t noticed, Limited Run Games has been making some pretty great Doom-related stuff over the last year or so. I feel like the replica Doom Marine helmet really flew under a lot of fan’s radar, but it was just one of the awesome items to go up for pre-sale. The latest, might be even better, depending on your collecting habits.

Just posted before the holiday-weekend was a selection of new collector’s editions for the original Doom series. That’s Doom, Doom II, and Doom 3, if you’re wondering. While the games are set to be available in a ‘vanilla’ form (straight-up bundle of 3), there’s also a few outstanding-looking collector’s variations.

Both of these are available for the PS4 and Switch, so as usual there are no Microsoft-flavored versions. If you have access to those consoles though, you’re gonna want to take a look at these.

As a special note here, don’t miss that the PS4 and Switch editions include differently colored keycards. So if you’re a big fan, you might want one of each. Fortunately, you’ll have a while to make up your mind.

While these could presumably sell-out in the meantime, these are not as limited (no pun intended) as Limited Run Games’ usual offerings. LRG says that the pre-order phase will remain open for a period of 4 weeks from the initial day of sale. That was April 2nd, for those taking note.

Jason's been knee deep in videogames since he was but a lad. Cutting his teeth on the pixely glory that was the Atari 2600, he's been hack'n'slashing and shoot'em'uping ever since. Mainly an FPS and action guy, Jason enjoys the occasional well crafted title from every genre.
@jason_tas
Previous Spawn’s Universe takes McFarlane’s hero into a bigger world this June
Next Trailer(s): The time is nigh for Oddworld: Soulstorm