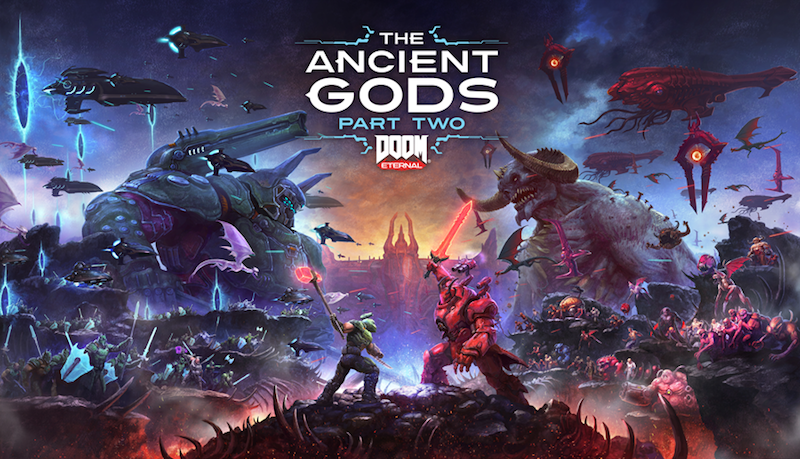 Oh my is this looking like something special for Doom fans… and yet it’s also been shockingly sans hype. Maybe it’s just me, but as epic as The Ancient Gods has looked and been, it’s basically been flying under the radar.

If it has seemed that way for you too, then all it’s going to take is one viewing of this trailer to get you on track as to how massive this new expansion looks. The Ancient Gods – Part Two launches an all-out war against hell, as the Doom Slayer leads a reforged army of Sentinels.

You denied the gods and awoke an ancient evil. Now rally the scattered Sentinel armies, lay siege to the last bastion of Hell, break through the fortress walls, and face the Dark Lord himself. The soul of the universe hangs in the balance.

If you couldn’t tell, The Ancient Gods – Part Two is loaded. Bethesda and iD are promising all-new locations, including “ancient Sentinel settlements and the cosmic wonders of the World Spear, to a devastated and overgrown city on Earth hiding a mysterious gateway, to the last bastion of the Dark Lord protected by towering walls and powered by advanced technology. “

And on top of that, there are new foes to vanquish. Along your way, you’ll find the awesome-looking Armored Baron, the Stone Imp, the Cursed Prowler, and the Screecher zombie. That last one powers-up surrounding demons when its killed too. So that’ll be fun.

If you have the Deluxe edition of Doom Eternal, or the year one pass, then you already have access to The Ancient Gods. If not, you can grab both parts a’la carte.

Jason's been knee deep in videogames since he was but a lad. Cutting his teeth on the pixely glory that was the Atari 2600, he's been hack'n'slashing and shoot'em'uping ever since. Mainly an FPS and action guy, Jason enjoys the occasional well crafted title from every genre.
@jason_tas
Previous Trailer: Mountains of Madness gets a new look as launch draws near
Next Disco Elysium: The Final Cut dancing onto PlayStation, PC, and Stadia this month