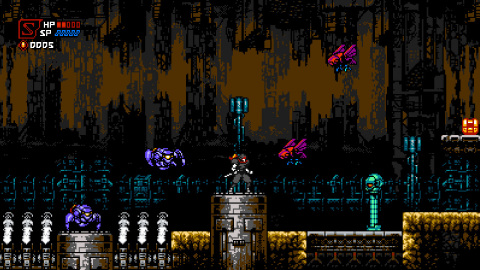 Great looking retro-action game Cyber Shadow arrives on the Switch this week, along with Hitman 3, and a whole bunch of indie titles.

Is there anything more 80s-ish than a cyber-ninja? Maybe, but I can’t think of anything off the top of my head. If you can’t either, then you need to take a peek at Cyber Shadow.

The new title is crafted to loosely resemble a game from the 8bit heyday of the NES. I say “loosely” since there are a bunch of effect at play in this one that just wouldn’t be possible on Nintendo’s original juggernaut.

So maybe it’s better tagged as a cross between 8 and 16bit generations? Either way, take a peek, cause it’s worth the look.

Aside from the above, there’s a bunch more out now or coming this week. Among those is Hitman 3 – Cloud Edition. Yep, the latest Hitman title is coming to the Switch, in cloud form. So the long and short of that, is that you’ll need an active internet connection to play it. That’s a little bit of a bummer, but it’s frankly the only way that the game could make the jump to the Nintendo hardware.

So there are those two, plus a bevy of other smaller releases. All in all though, it’s a chunky week for Nintendo fans. The full list is below.

* You can only download a free launcher application to test the game for a limited amount of time. This game uses cloud streaming technology, and you require a persistent high-speed internet connection to play the game. If your internet connection becomes unstable, the service will disconnect after a few minutes. Please use the free launcher application to test the availability and quality of the service for your region.

Jason's been knee deep in videogames since he was but a lad. Cutting his teeth on the pixely glory that was the Atari 2600, he's been hack'n'slashing and shoot'em'uping ever since. Mainly an FPS and action guy, Jason enjoys the occasional well crafted title from every genre.
@jason_tas
Previous Monster Energy Supercross 4 revs up for pre-order
Next Trailer: Highfleet takes to the skies this year from Microprose