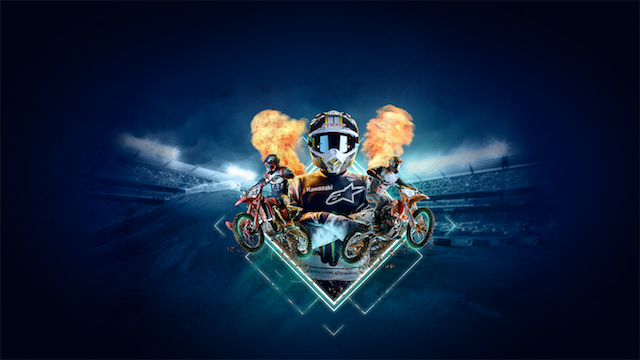 Ready to get back to the course in Monster Energy Supercross – The Official Video Game 4? Your time is almost here, as the racer heads into pre-orders.

To the starting line

Following up on the last game in the set, Monster Energy Supercross – The Official Video Game 4 is coming up, and should make two-wheeled racing fans smile. The game looks to be pretty loaded, with plenty of options that include a Track Editor.

It’s looking pretty good too, as the series makes the jump to the current round of consoles from Sony and Microsoft.

Have a look at the action in the new trailer.

Aside from being able to make your own courses, Monster Energy Supercross – The Official Video Game 4 will offer 250SX and 450SX categories, solo and co-op play, and a robust-sounding career mode. A skill tree will be upgraded and managed by earning earning points. Of course, you’ll get those “during races, special events, taking on training and fulfilling of the Journal”.

That last category is an intriguing one too, albeit a little mysterious. According to developer Milestone, Journal will be packed with “special objectives to show who is the best.”

Expect to see Monster Energy Supercross – The Official Video Game 4 land on the PS4, PS5, Xbox One, Xbox Series X|S, and PC (via Steam). Console players will have two different picks when it comes to versions, with standard and Special Editions coming.

The game is ready for pre-order right now, and set to arrive on March 11th.

Jason's been knee deep in videogames since he was but a lad. Cutting his teeth on the pixely glory that was the Atari 2600, he's been hack'n'slashing and shoot'em'uping ever since. Mainly an FPS and action guy, Jason enjoys the occasional well crafted title from every genre.
@jason_tas
Previous Trailer: Golden Force hacking and slashing onto Switch next week
Next Nintendo Download: Everyone Carries a Shadow