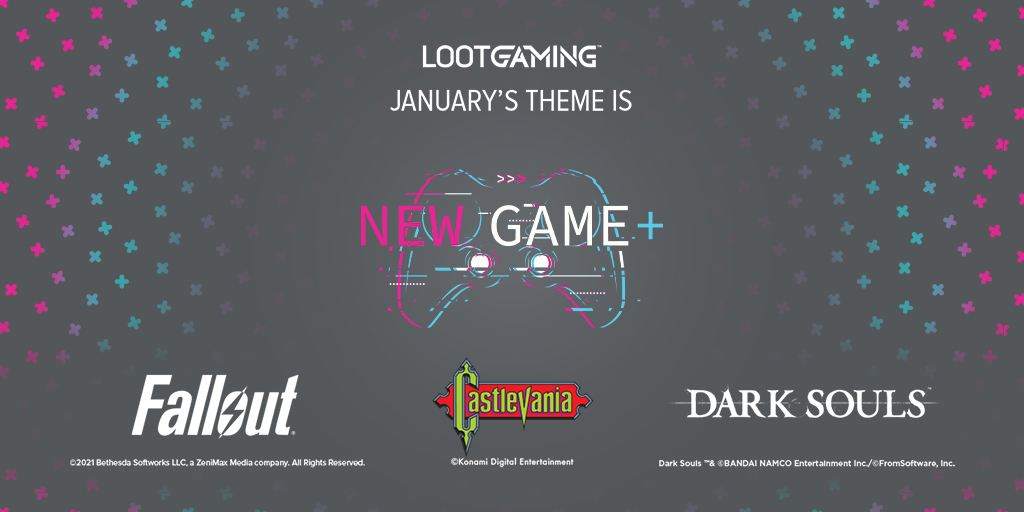 If you’re a Castlevania fan specifically, you’re going to want to have a look at New Game+. That’s the title of 2021’s first Gaming Crate.

The plus is in the… Plus

Kicking off the year in fine looking form is Loot Crate, who has a Loot Gaming Crate that should make Konami fans smile. The pack is loaded up with Castlevania gear for the colder weather, though of course there’s more than that.

First and foremost though, is a pretty awesome looking Castlevania hat and scarf. It’s patterned after the original NES ‘Vania, with a logo’d hat and scarf that actually has part of one of the game’s side-scrolling levels pointed on it.

So what else is there? Well, uh… stuff. LC doesn’t tip its hand completely when it comes to new Crates, if you don’t know. The whole point is that the Crates are packed with stuff that’s a surprise. Like a blind box or master bag, you’re not going to know everything that’s in every Crate, just enough to pique your interest.

We do know however, that Dark Souls and the ubiquitous Fallout are both part of this box as well. Dark Souls will have a mug included, though there’s no word on the Fallout item(s). Oh, and there’s also a Doom pullover that’s being offered, though that’s a separate purchase that you can bundle with this Crate.

The Loot Gaming Crate for January 2021, New Game+ is available for order right now. It’ll be orderable through the 21st of this month (January), at 9am pacific time. At that point new orders won’t be accepted anymore, so if you want in on this one, you might wanna click here.

Jason's been knee deep in videogames since he was but a lad. Cutting his teeth on the pixely glory that was the Atari 2600, he's been hack'n'slashing and shoot'em'uping ever since. Mainly an FPS and action guy, Jason enjoys the occasional well crafted title from every genre.
@jason_tas
Previous Trailer: Orc Warchief builds its band on PC
Next Director’s Cut coming for IDW’s TMNT: The Last Ronin