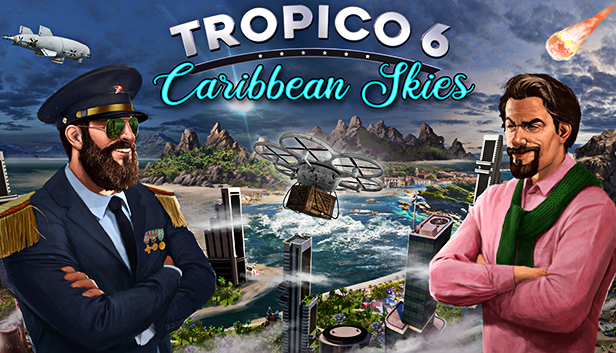 Tropico 6 take to the skies for latest add-on

You might’ve forged your own banana republic in Kalypso and Realmforge’s dictator-sim Tropico 6, but as of today, you can conquer the friendly skies.

It’s kind of tough to imagine something that the original Tropico 6 release missed. The civilization-builder seems to cover all the bases. Trop6 allowed players to create their own South American dictatorship, building out its cities, utilizing its resources, and playing a hearty dose of politics. There was one big thing that it was lacking though – air-power.

You can check off that box today though, with the release of Caribbean Skies. The new add-on pack for the game allows would-be presidente’s to fully exploit the skies.

The pack sets players up with 5 new missions, as well as drones to control, new characters to meet, and a fresh antagonist who’s looking to make things tough for the island nation.

The Caribbean Skies pack is available now to add onto your copy of Tropico 6 for $14.99 USD. You can nab a copy via the Kalypso Store or Steam on the PC, as well as the PS4, and Xbox One. Epic Game Store and Switch versions are coming along as well, though there are no dates as of yet for those.

Still on the fence about starting your own dictatorship? Check out our reviews of the PC and Switch versions of the game.

Jason's been knee deep in videogames since he was but a lad. Cutting his teeth on the pixely glory that was the Atari 2600, he's been hack'n'slashing and shoot'em'uping ever since. Mainly an FPS and action guy, Jason enjoys the occasional well crafted title from every genre.
@jason_tas
Previous DST expands its Gallery Diorama series with Star Wars’ Darth Vader
Next Nintendo Download: Double, Triple, Broil and Trouble