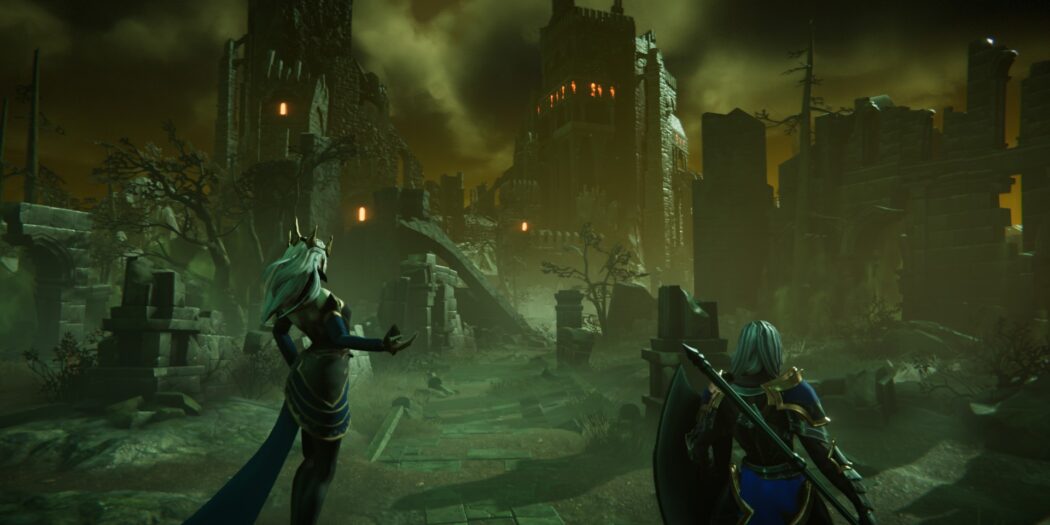 Well, tis the season for a little vampiric action, I suppose. And that’s just what’s on tap in Kalypso and Palindrome Interactive’s Immortal Realms: Vampire Wars. Yes, the title is a little obtuse, but this is a strategy title that has some bite… pardon the (intended) pun.

While I’m not a massive fan of vampire fiction, this particular title plays things in a somewhat unusual way. Namely, what if a medieval fantasy world had been overrun with the undead… and yet life kept on keepin’ on?

Combine that narrative with some engaging gameplay and some terrific graphics, and you have a pretty nice surprise that might make strategy gamers smile like a blood-drunk vamp.

So, as I mentioned, this one is pretty interesting as far as the backstory goes. Immortal Realms: Vampire Wars sets players into the boots of several vampiric leaders of major clans. Granted that might not sound that unique, but trust me it is.

These clans aren’t hiding in the shadows (well, not all of them), they’re actually ruling in the… shadows. As things start off, the Dracul are in command of their own realm, Warmont. And yes, that’s complete with territories, castles, towns, and peasants.

That peasantry is made up of humans, who basically are willing cattle for the Lords. But besides them, there are also the turned thinbloods, and a host of dark-fantasy creatures. These make up the bulk of the military forces that the royalty of the land as well. Vlad Dracul and his wife Cecilia, command are in command of those. But he’s not the only power in the world.

Beyond Dracul’s lands lays a human empire, but also other vampire-controlled lands who conspire against Warmont. These include the magic-centric Moroia, and the ancient and terrifying Nosfernus. All of them will play a part in the game’s campaign.

It’s easy to see where developer Palindrome Interactive got the inspiration for the races, but they’re all used in a pretty cool way. And it’s one that’s overall unique. I can’t think of another fantasy property that uses vamps in the same manner.

I think turn-based gameplay might be something of an acquired taste in the present age. It’s not exactly fast-action after all, and most strategy games that truly break out and become blockbusters seem to be of the RTS ilk. When it’s done well though, the turn-based element can really make a strategic theme shine, and that’s more or less what’s happening here with Vampire Wars.

Yes, the game is turn-based, but it has a level of excitement to it. If it makes sense at all, it’s action is a fast-paced version of the tried and true gameplay. And it also comes in two forms. First, there’s an overworld. This is the main map, where you’ll move your armies. But it’s a lot more than getting from here to there with a few enemy encounters along the way.

The overworld allows you to create new units, merge forces into larger armies, annex new lands and structures, and do a host of other things. There’s a lot happening, and I imagine it might sound like a bit much, but it isn’t overloading. The options are all very straightforward and super easy to navigate. That includes the card mechanic.

You’ll gain cards several different ways in the game, and they can be incredibly effective when used correctly. Cards can grant you conscripts and more on the overworld, but also sway momentum when in battle.

They can take you from a loss to a win pretty easily. That is, if you have the right ones they can. Cards range in effectiveness from allowing you to drain your enemies on the field and pulling life from them, to giving you extra movement for a pair of turns.

Playing the right cards, and the timing of those deals, is crucial. And that goes for those are are playable on the overworld use as well. Don’t just use them as you get them, pick and choose when.

On the field of battle

Before you actually engage in combat, Vampire Wars actually gives you a forecast. It’ll tell you if you’re in for an easy time, a harried battle, or a nearly-surefire loss. Just uh… don’t put too much stock in that. More than a few times I easily won a fight after being told I had no chance. So, ‘grain of salt’ time.

When you’re actually in battle in Vampire Wars though, things go about how you’d expect from a turn-based title. Before a fight starts, you’ll place your units. Then once the action begins, you’ll move across the battle-map, attack, use items and environmental hazards/buffs, and create scenarios that give you the best chance of winning.

As I mentioned above though, it’s all done at what feels like a brisk pace. Things just kind of hum along in Vampire Wars and it’s really refreshing, with turns feeling much livelier than most games of this type.

And yes I realize that this is a game about the undead and I’m saying it feels lively, but it does. It also looks great if we’re keeping score (and we are).

I absolutely adore the looks of Vampire Wars. As with the gameplay, those looks are broken up into two different levels. Both look good, but one’s just a tad cooler than the other.

The overworld in particular, is awesome looking. It’s packed with spooky detailing and ranges from old school macabre, to that of a hellscape. If that’s your kind of thing, I feel pretty safe in saying you’ll dig the visuals.

As for the actual battle maps, they’re nice looking too. They aren’t quite as well detailed as the outer world, but they carry over all of the thematic elements that make it work. And they have some terrific looking effects happening too.

The characters though, eh, they’re okay. Units in Vampire Wars are mostly groups, and that means they’re pretty small. As such, they don’t sport a lot of intricacies that are going to catch your eye. And when you do see one close up, they leave a lot to be desired. That’s kind of a given with the genre, but it’s worth a mention I think.

It’s also the same with the audio. I liked the music a lot, as it’s all really fitting, mood-setting stuff, and if you have the option of using a decent speaker system, I’d say fire that up. But on the flip side, the voice work was only okay. Sometimes characters sounded great, and sometimes just amateurish. Also units in combat say the same thing way too often. Just a little bit maddening.

I ended the above on a bit of a down note. But even so, Immortal Realms: Vampire Wars has a lot going for it, and is a worthwhile strategy title for genre fans.

Actually, it might be a worthwhile title for those that aren’t all that into strategy as well. I can’t say I love turn-based games, but I enjoyed my time with this one a ton. That definitely says something.

And hey, it’s the perfect season for things that go bump in the night.

A fast-paced. but turn-based strategy title, Immortal Realms: Vampire Wars combines a limited card-based system with traditional strategic combat and decision making. It's a terrific looking game, with some excellent visuals for the Halloween season, and terrifically addictive gameplay. While it's not perfect (some of the presentation does fall flat), there's more than enough here for me to recommend it to genre fans.

Jason's been knee deep in videogames since he was but a lad. Cutting his teeth on the pixely glory that was the Atari 2600, he's been hack'n'slashing and shoot'em'uping ever since. Mainly an FPS and action guy, Jason enjoys the occasional well crafted title from every genre.
@jason_tas
Previous Trailer: Season 6 of Call of Duty: Modern Warfare kicks off with a bang
Next Loot Gaming scares up an October crate with Wolfenstein, Dark Souls and more