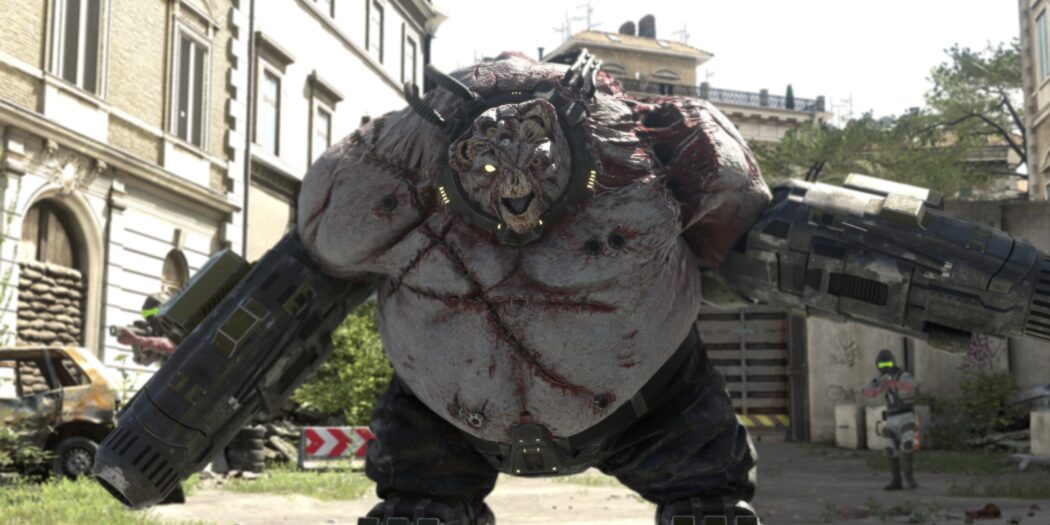 Serious Sam 4 brings the franchise to 2020. The more the world has changed, the more Serious Sam has remained familiar.

Serious Sam 4 isn’t a modern, Doom-style reimagining of the franchise. It’s a calculated arcade-shooter that only sprinkles in new elements on top of the familiar running, gunning, and more running of the series’ heyday.

When I first started Serious Sam 4, I wished it wasn’t so. I missed the style and rhythm of this year’s Doom Eternal. I missed effortlessly and agilely confronting the demons of hell in buttery smooth combat.

But Serious Sam isn’t Doom. It’ll never be Doom. And once you’ve started filling out your arsenal of 15 weapons and eight equipment types, you’ll be glad it isn’t.

The gist of it that matters is, aliens are on earth. We don’t want them here. Cue Serious Sam and his assorted freedom-loving sidekicks.

That’s where I expected my investment to end, but instead I found myself hooked as much on the plot of the 10+ hour story as I was on the gameplay. Ample cut scenes, hilarious dialogue, and well-delivered one-liners bring characters such as Father Mikael (“I have my shotgun and my faith, son. I am already packed”) and Kenny (“I lost my shoe!”) to life, while one-off side characters contribute memorable jokes and roles that provide the perfect opportunities to kill bad guys.

Lots and lots of bad guys.

The last time I’d played a Serious Sam game was a decade ago, when I ran the gauntlet co-operatively in Serious Sam HD: The Second Encounter, so you’ll have to forgive me for my rocky start in Serious Sam 4. Learn from my mistakes: move. Run backwards. Run sideways. And possibly even run away. Whether you’re shooting, aiming, or reloading, if you stop, you’ll die. That’s as true now as it always has been for Serious Sam, because the gameplay basically hasn’t changed in the slightest. If you’ve played before, then you’ll already know what to do to stay out of the way of Werebulls, Headless Kamikaze, and the rest of the alien invaders.

If you haven’t, see above about running away.

That’s not to suggest you won’t have everything you need to handle the scores and scores of enemies. The game starts slow, giving you a pistol before you work your way into a shotgun, assault rifle, and so on. Your standard enemies will demand respect, teaching you how to dodge and deal with everything they throw at you in increasingly complex mixes and increasingly mind-boggling numbers.

But just when you need it, the game will also introduce you to a new way of making friends. From the classic Cannon that churns through lines of alien scum to the cluster-grenade-chucking Grenade Launcher, what once required focus will eventually require you to hold down your fire buttons.

Both fire buttons, because you’ll want to invest your rare skill points into dual wielding. Trust me. No horde seems unmanageable when you’ve got double chain guns or twin Devastators.

Every enemy type is best suited to another piece of your arsenal, and finding which one works best for you for each alien is key to managing the legions of enemies that will come your way. Sometimes hundreds of enemies will come screaming towards you, so it’s important to keep a cool head, pick your high-priority targets, and start mowing them down. Before the rest of your foes spawn in.

Difficulty settings change the things you’d want them to change. The easier you go, the less damage you take and more damage you deal. Easy provides a great balance between fearing for your life and feeling like a God, while Hard will demand more from you, and give you a reason to start using your equipment. From black holes to chemical warfare, these battlefield-clearing single-use items have the kind of impact you can only dream of. I was constantly surprised by just how effectively they give you the upper hand in seemingly-impossible situations.

The only shame is the few times your entire collection is taken away from you, never to be returned. Let the hordes hoard: make use of your super weapons without a second thought!

In other games, I sometimes dread seeing the next arena and knowing it will be waves of enemies before I get to move on. Not so in Serious Sam 4. It’s a joy to wonder what kind of insane combination and sheer number of foes you’ll run into next, and only more tantalizing to fight them.

The game isn’t just walking from ruined arena to ruined arena. From tight, dark corridors to wide-open fields that require a vehicle to traverse in a timely fashion, Serious Sam 4 does a great job mixing it up. The Popemobile is a particular standout, but I’ll save the rest of the surprises.

Not every enemy is made equally. Mummies, Harpies, and undead skeleton bulls don’t have great feedback or satisfying hit boxes, but they are few in a smorgasbord of chunky, bleeding bad guys.

While the monsters and environments appear decently detailed and there is a definite sheen, stiff animations during cut scenes and in combat don’t do Serious Sam 4 any favors. Serious Sam 4 won’t be turning any heads with its visuals, but every detail you need to pick up and pick out from the environment is where you need it. Health, Armor, and Ammo pickups glimmer and enemies are as defined by their silhouette as they are their sound effects. You’ll almost always hear the blood-turning screams of the Kamikaze or the stampeding bones of the Kleer before you see them, helping you know what is coming your way even when you’re busy running for a more advantageous position. Projectiles are just as defined. Put them all together, and you’ll never be at a loss for what it was that wiped you out.

The music, meanwhile, grows with the action. As with the story, I expected forgettable machismo, but the pieces here can be as much as moving. There’s a powerful, genuine score underneath all the screaming and groaning, and it perfectly accentuates the blood-rushing combat.

Serious Sam 4 is more than a history lesson. Its dated elements rarely detract from the genuinely good time. Poor controller support, awkward (at best) melee attacks, assorted visual glitches (dead dudes still gurgling, characters chopping through the environment during cutscenes, etc.) and stiff animations shouldn’t keep you from enjoying a solid single-player performance, and definitely shouldn’t keep you from tackling the hordes with your friends in online co-op. If you haven’t tired of circle-strafing and back-pedaling, then get stuck in with Serious Sam 4.

Editor’s Note: A launch-day patch should sort out some of the various glitches, and mod support (complete with a Serious Editor) should be available within the next few months.

Images supplied by press kit, except for the 3rd-person image, which was capped on the Reviewer’s PC at lowest graphic settings.

Serious Sam 4 hasn't changed much, but it's still a romping good time in 2020. Blowing up hundreds of aliens with satisfying guns (just don't forget to dual-wield) is something that only gets better with time. The surprisingly good writing helps make up for visual glitches, awkward animations, unrewarding melee attacks, and a slow start.

Brutal Gamer's Nintendo Editor began his gaming life a little late- at five years old. But he's made up for it in the two decades since, gaming and writing about gaming with the same passion, fervor, and unrelenting love as his five-year old self.
Previous Darksburg brings supernatural Roguelite gameplay to the PC today
Next Surprise! Kirby Fighters 2 is live on Switch now