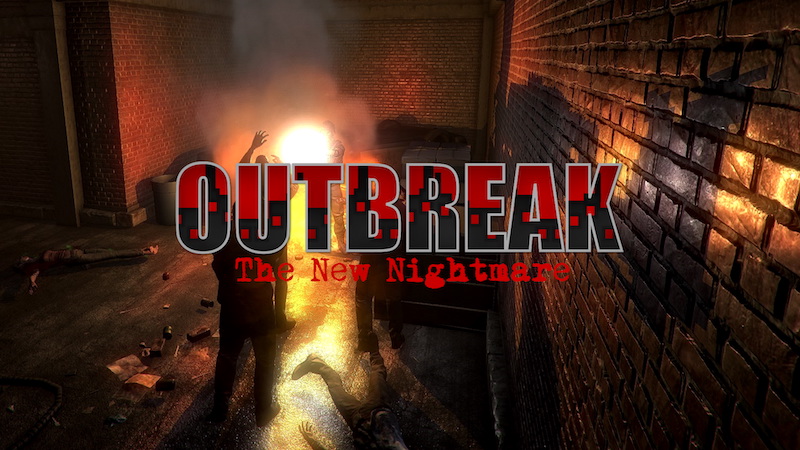 Is this survival horror game worth playing? Outbreak: The New Nightmare tries to bring back a bygone era, but should have stayed in its grave.

Listen, I cannot in good conscience recommend this game to you. Or to anyone honestly, lest they have committed an unforgivable crime.

I don’t know what exactly it is that gave the old survival games the charming overall design-aesthetic that they possess even to this day, but Outbreak does not have any of that. The gameplay feels extremely stiff. The combat is uninteresting and the survival horror aspect of the game is almost non-existent.

It just doesn’t feel like a finished product – and that’s going to be a huge problem moving forward into this review.

Outbreak plays pretty similarly to those old Survival Horror classics I mentioned. You can choose to play with tank controls (classic Resident Evil) or with updated “smooth” controls. Those are similar to Code Veronica X or Resident Evil Outbreak.

It’s pretty clunky, no matter which you choose. And the multiplayer aspect doesn’t feel too good either, especially on local co-op.

I’m a fan of splitscreen gaming as I grew up playing a lot of split-screen games. But the 2 player mode for Outbreak: The New Nightmare does absolutely nothing for me – and I played this game on a PS4! The game basically splits the already sub-par single player experience into two, and if that doesn’t multiply my headaches and grievances with this game, then nothing will!

The old Outbreak games made playing with one (or more) other players interesting because there were important and compelling things at stake. I mean things like the ever growing infection meter or the player’s attachment to the characters and the plot. In my 8 or so hours with this game, I just didn’t care about anything at all.

Outbreak is mostly ‘collect these items and proceed to the next area’… and oh there are zombies running around so do try to survive. The premise could have just been my previous statement and it would still be more accurate than whatever narrative drivel this game tries to sell you at any given point in time.

Combat is just as big of an afterthought as the story. I say that because it really doesn’t feel like something the developers finished implementing. I actually have to wonder if the developers have shot a gun in a video game before, must less seen in real life.

It’s an unfinished feel that extends past the gunplay. While the guns don’t have recoil and the shooting animations themselves are stiff, the melee weapons don’t have any weight behind them whatsoever.

One of my favorite things about the old Resident Evil games is the interesting plot. Everything was inter-connected. And even if the script or the acting felt and sounded like a B-movie, it was still fun to play and live out an adventure as Chris Redfield or Leon Kennedy.

In Outbreak: The New Nightmare we’ve got characters like “Hank” the soldier. He starts with a shotgun – and that’s pretty much the only interesting thing about him.

And it’s much the same with every other character in the game too. In fact, it almost doesn’t matter who you play because they all play so similarly to each other! Clunky and uninteresting.

The game tries its best with the exposition here and there, and it has obviously taken some cues from the best Survival Horror games of old, but it just doesn’t work.

I tried my best to love it, I really did, but it just doesn’t work for me.

I honestly don’t have much to say about Outbreak’s graphics. They’re okay, more or less. Probably a high point.

But if you’ve read any other of my reviews, then you should also know that I tend to put a huge emphasis on the sound-design. Pretty much as much as I do a game’s looks, if not more.

Outbreak has music, and some voice acting as well, plus some moaning from the zombies. If that was the only thing I wrote here, it would be the most positive thing in the world compared to what I really have to say about this game.

The music is almost non-existent, but that’s not exclusively a bad thing. Some games, like Alien: Isolation, have proven that sometimes silence is the only ambiance you would need to take something “scary” and “tense”. With liberal use of silence, a game can turn its overall experience into something… more.

In Outbreak’s case, having barely any music just feels lazy. It’s as if the developers didn’t have any time to work on the sound design at all. The guns don’t even sound good! If the guns and melee weapons sounded like they should, I might have given this game some slack. But considering everything else about it is as dull and uninteresting as day-old Apple Pie, I won’t.

Outbreak: The New Nightmare is not the re-imagining of survival horror I’d hoped. It isn’t even an homage to Resident Evil. Everything about it is lazy and dull and should only be played…scratch that. It shouldn’t be played at all. Don’t bother even if it’s on sale. I’m really disappointed with this game because I was expecting a lot from the developers.

I hope they can recover from this, learn from whatever mistakes they made here and come back stronger.

Outbreak feels more like a dull rehash than an ode to a genre, or a nostalgic gem. Decent looks can't make up for lackluster sound, a boring story, and unfinished-feeling gameplay. Avoid this one.