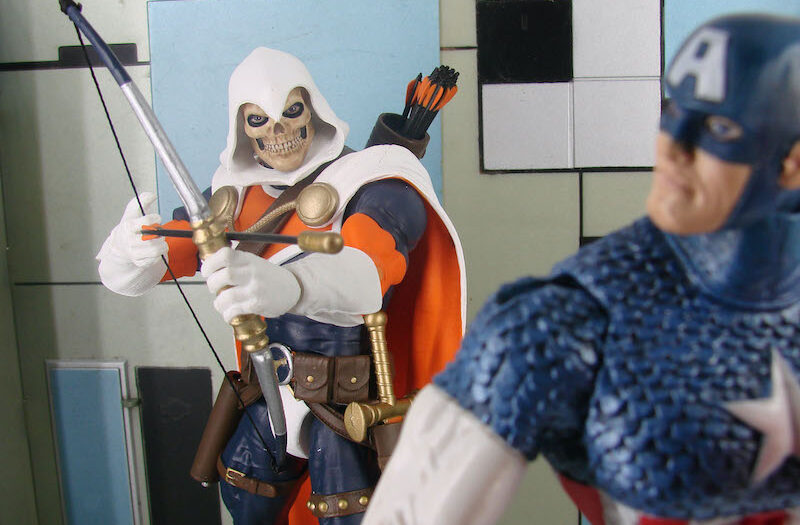 The villain of the Black Widow movie and Marvel Comics mainstay, Taskmaster is getting a new action figure in DST’s Marvel Select line.

Almost any Marvel Comics fan should be instantly familiar with this guy. Aside from being everywhere in recent years, Taskmaster is a true classic Marvel U villain.

He’s been featured in plenty of comics, and has battled tons of superheroes over the decades. Heck, he was even in the Spider-Man video game that released on PS4 last year… sort of. Now he’s ready to join your toy shelf, in the 7″ scale.

Yes, Taskmaster is the latest Marvel Comics character to join Diamond Select Toys’ Marvel Select figure line. This particular version of the villain is based on the comic book, though he includes a pair of portraits. One shows off his iconic skull mask, while the other looks a little more modern.

Taskmaster stands in at the usual Marvel Select 7″, and sports 16 points of articulation.

With the announcement of the Black Widow movie – and the action-packed trailers that followed – the world was introduced to a fan-favorite character from Marvel Comics: The Taskmaster! Now an international superstar, his big-screen debut has been delayed until fall, but DST and the Disney Store are taking this opportunity to release a fully comic-accurate figure of the Taskmaster at ShopDisney.com and Shop.Marvel.com!

Taskmaster should be available right now via either shopdisney.com or shop.marvel.com.

Jason's been knee deep in videogames since he was but a lad. Cutting his teeth on the pixely glory that was the Atari 2600, he's been hack'n'slashing and shoot'em'uping ever since. Mainly an FPS and action guy, Jason enjoys the occasional well crafted title from every genre.
@jason_tas
Previous Cyberpunk 2077 gets new Dark Horse mini-series
Next Tony Hawk’s Pro Skater 1 and 2 to feature cast of modern greats