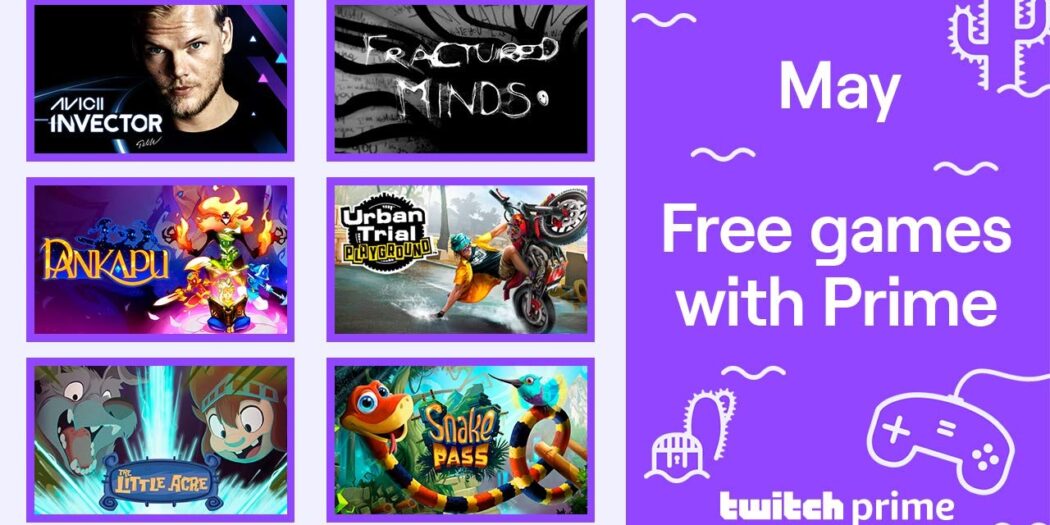 Home / Free Stuff / Twitch Prime free games for May include Snake Pass and more, and lots of loot

Twitch Prime free games for May include Snake Pass and more, and lots of loot

Time again for a new selection of freebies from Twitch Prime. Members can grab copies of games like Snake Pass and Urban Trial, as well as solid loot.

As usual, there’s a nice little spread of free games and loot drops for subscribing PC gamers this month from Twitch Prime. Members can grab a total of 6 games, as well as loot for titles like Fallout 76, League of Legends, and Destiny 2.

While the games aren’t terrible, it’s the loot that takes the gold star this month, with an arguably better selection of titles. Of course, unlike with the actually giveaway games, you’ll have to actually own the base games to make use of any of the loot.

May Free Games with Prime

May is Mental Health Awareness month, and Twitch Prime is proud to offer members two special games from Wired Productions as part of this month’s Free Games with Prime: Fractured Minds, created by Emily Mitchell, a 17-year-old who found solace through game development as she journeyed through severe anxiety, and  Avicii Invector, a pulse-pounding frenetic rhythm-action experience co-created by the late artist. You can learn more about these games and the causes they support via Safe In Our World and Wired Productions. This month’s other free games include action-platformer Pankapu, stunt racing game Urban Trial Playground, adventure game The Little Acre and action puzzler Snake Pass.

And that’s not all! Right now, Prime members get an extra free game every Friday. So in addition to this month’s six free games, Yono & the Celestial Elephants, a grand adventure featuring carefully designed puzzles, treasure hunts, and a sprinkling of combat, and Old School Musical, a wacky musical adventure that takes you on a tour of all your favorite retro games, are available now.

The above are available from tomorrow, May 1st, through the 31st.

As I mentioned, the loot is a little more interesting than the full games this month. That’s mainly because it involves free additions for the reinvigorated Fallout 76, but there’s other stuff to grab as well.

Jason's been knee deep in videogames since he was but a lad. Cutting his teeth on the pixely glory that was the Atari 2600, he's been hack'n'slashing and shoot'em'uping ever since. Mainly an FPS and action guy, Jason enjoys the occasional well crafted title from every genre.
@jason_tas
Previous New Command & Conquer Remastered screens roll out
Next XBox Games With Gold: V-Rally 4, Warhammer, Soccer, Overlord