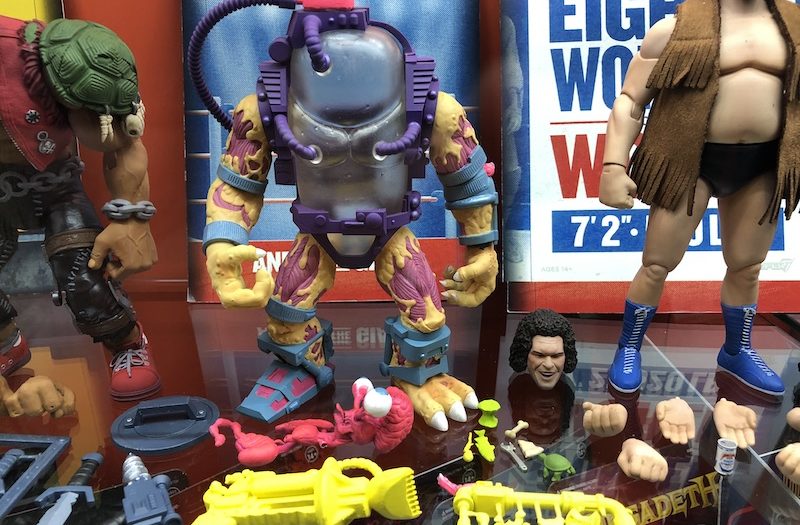 Super7 had an awesome showing at Toy Fair 2020, with an incredible assortment of Ninja Turtles, Transformers, Thundercats, and more.

Super7 is a name that’s really made itself known over the last few years. While the company has been around for a while, their Masters of the Universe Classics figures (taking over from Mattel for a while) made them household names in the action figure collector community.

While that license has gone back to Mattel for now, they’re not just set to fade away. Super7 has a full slate of Thundercats coming up, as well as some incredible Teenage Mutant Ninja Turtles figures. But, as you can see in the galleries below, that’s far from all, especially if you’re into their retro-Kenner-themed ReAction figures.

ReAction Figures are kind of a strange brand, and one of those things that you wouldn’t see coming out of one of the major toy houses. They’re throwback figures, crafted to look like the 5 points of articulation figures that were common back in the 80s. If you’re wondering what that means, kind of just think Kenner’s Star Wars toys and you’re on the right track.

Super7 is seriously running with the idea too, expansion into the Toxic Crusaders brand, adding in Army of Darkness (!), Aliens, Robocop, Transformers (dig that giant Devastator), and many more.

Check it all out in the monster gallery below.

A line that’s caught fire for Super7, the TMNT Ultimates are looking as great as ever. Well, almost. The Shredder on display has a busted foot. Irony!

But his prototype’s condition aside, these figures are flat-out stunning, paying serious homage to the original Playmates Toys TMNT figures from the 80s and 90s. Wave 1 is on the way in relatively short order, and wave 2 is set to arrive this fall. That’s what Super7 was showing off in their booth, and it’s an impressive array of characters.

We get one Turtle in team-leader Leonardo, two villains with amazing toy-accurate Shredder and Bebop, and one niche character in Mutagen Man. He’s actually also a villain if I remember correctly, so this is a pretty bad guy heavy wave. This is some great stuff though, all around, and I can’t wait to see more.

Wave 1 and 2 have both been announced, and are coming up soon. As for wave 3, that’s just what Super7 was showing off at Toy Fair. It’s a nice lineup too, with a long awaited villain included… and a niche character that mystified me.

Here we find classic heroes Jaga and Cheetara, as well as fan favorite baddie Slythe, who seems to be off color-wise. I’m not sure what that is, though he might be corrected at some point, so don’t lose your heads yet ‘Cat fans. And then we have Cracker.

I had no clue who this was, even though I think I saw the entire run of the original Thundercats cartoon when I was a kid. Apparently though, he’s a robot space-pirate, and a villain. So there you have it.

Even though he’s not quite my cup of tea, I am glad to see Super7 going deep for this line, in the same way they appear to be for TMNT. It’s great to get some characters that we normally wouldn’t see made.

As usual with companies like Super7, there were a few items around that defied the above categorization. That included the familiar Halloween candy buckets, as well as some new stuff like the Madballs, MLB bullpen carts, and Garbage Pail Kids cards.

Jason's been knee deep in videogames since he was but a lad. Cutting his teeth on the pixely glory that was the Atari 2600, he's been hack'n'slashing and shoot'em'uping ever since. Mainly an FPS and action guy, Jason enjoys the occasional well crafted title from every genre.
@jason_tas
Previous 2019 Brutal Gamer Awards: Individual Honors
Next Top 10 Games of 2019: Nintendo Editor Michael’s Picks