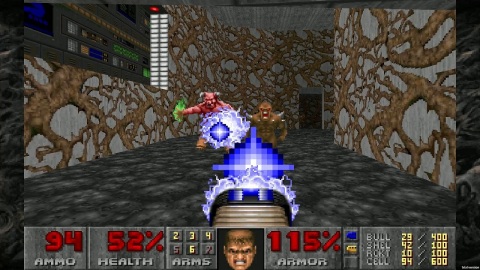 Doom fans who bought into the re-releases this past year are going to like the latest patch, which includes a selection of improvements.

Have you been thinking that you need more classic Doom in your life? Well friend, you’re in luck. Bethesda announced a slate of improvements to both the original and iconic sequel, which both landed on modern consoles last year.

The update adds in 60fps, and little enhancements here and there. But the real bonus in this download is the addition of add-ons. Yep, from now on you’ll be able to download a little fresh hell to play through in the form of “curated” maps.

Those are the major new elements, but a more in-depth view on the patch can be found here. All of the above should be live for all 2019 versions of Doom and Doom II right now.

Jason's been knee deep in videogames since he was but a lad. Cutting his teeth on the pixely glory that was the Atari 2600, he's been hack'n'slashing and shoot'em'uping ever since. Mainly an FPS and action guy, Jason enjoys the occasional well crafted title from every genre.
@jason_tas
Previous Nintendo Download: Pre-Purchase Tokyo Mirage Sessions #FE Encore Now!
Next Two new Sega Ages hitting Switch this month