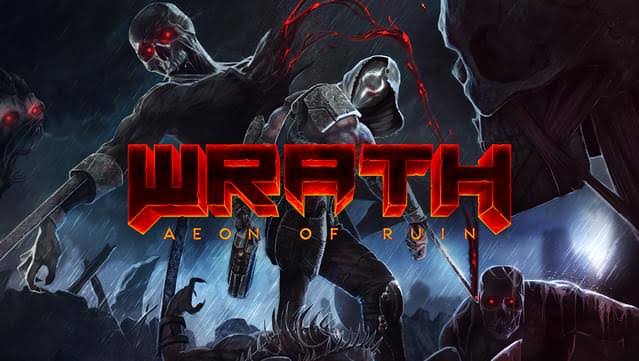 Ahhh, previews. Taking a sneaky peak at games before D-Day. This one’s a biggie too, WRATH: Aeon of Ruin.

Blast from the past

3D Realms is known throughout the industry for their games. Duke Nukem, Wolfenstein, Rise of the Triad, Max Payne, Prey; 3D Realms were amongst the big boys of first person shooting for a long time. So you can imagine the excitement upon hearing that they are not only working on another shooter, but that it’s available on Early Access.

Now, I disagree with Early Access on principle, but you’ve all heard why it’s bad, so I won’t waste your time. I also won’t give away the story of WRATH: Aeon of Ruin. Mostly because I never found out about it, but also because I don’t want to ruin it (hehehe) if it turns out to be a good one. No my friends, today we will be talking about the true meat of the game. The very thing that brings all of us to this medium in the first place. The Gameplay! Also, the audio and visuals, but mostly gameplay!

Alright, so let’s get this out of the way first. WRATH is very fun. It’s cathartic, fast paced, weapon swapping, monster killing fun! If I was more into this stuff, I would waste hours just running around killing monsters with big scary guns. Unfortunately, I personally prefer to have a reason to murder demons, but even a foppish story fop like myself can enjoy the gameplay in this. That’s how fun it is. One must never forget, however, there are always problems.

My first big problem with WRATH came from playing the game a few days later. I unfortunately live in a country ravaged by power outages, but some gaming time finally came up and WRATH had an update. Fully updated and ready to jump back in, I found out that any save made before the update was no longer compatible. All of my work was suddenly gone, which is a poor restarting point.

The next big problem is the game’s constant issue with hit tracking. I shoot a demon in the face, and it dies. Good. I’ll shoot the same demon in the face two rooms later, expecting it would die, only to have it rip my nipples out for suggesting the very notion. Not good. I first thought it was a matter of range, but it doesn’t make sense when a chest shot from across the room kills the hellspawn, but a chest shot at point blank range doesn’t.

There is a bit of a gliding problem, like there is with almost every game from this era, which isn’t too bad but can make jumping onto things suck. The game also boasts good and bad surprises. Bad in the form of the cheapest jump scares money can steal, good in the form of monsters doing weird stuff in the right conditions. I shoot a creature’s head off in a supposedly new way, it’s shoulder blades unfurl into arms to attack me! Brilliant!

There is a weird sort of customization to this game, that comes in the weaponry. The era of gaming that WRATH is recreating here is known for being unforgiving, and the weapons start off being mostly about efficiency. The next weapon you pick up tends to have more of a punch than the last, until the shotgun. After that, you get a machine gun that shoots fangs, that doesn’t seem to do as much damage or even shoot as far. I kept using it on the assumption that it would help against some new enemy, but nothing cleared rooms quite like my shotgun so there was no reason to use it.

I suppose it might affect one type of enemy more, or maybe it hits for less but trades off by having more hits? Regardless, it seems like a style choice more than anything. Which is cool! Don’t get me wrong, I’m an efficiency person in most games, but if I see something cool that doesn’t do too much worse it’s my go to from then on. Doing damage is fun, but these games are almost about the spectacle as much as they are about the catharsis. Like they say, you eat with your eyes first.

A vision of a bygone age

Speaking of eating with your eyes, I’m glad to see that 3D Realms brought not only the gameplay from the 90s, but the graphics as well! It’s uncanny how much WRATH truly looks like an expansion to Quake sometimes, and it makes you wonder, why? Doom got rebooted recently with new graphics, and it only enhanced the experience, so what is the reason for the old look? Well, nostalgia, obviously. Old 3D Realms is trying to slip a fast one past us, get those extra bucks by tugging at our memories.

That’s not to say that the visuals are awful, just old. Not even a Shovel Knight kind of old where they replicate the colour pallet and style of an old system, it just looks like another old game. I had to check that I was actually playing a new game more than once, which is a bit pathetic. Surely 3D Realms has the capital for some better graphics by now. While I’m dreaming, can we stop making this about demon killing? We all accept violence in games now, so you don’t have to appeal to the nutcases with your super edgy games anymore. Let us have some fun and colour in these games, please!

On a more professional note, the first level of the game is set in a snowy cathedral/graveyard with what seem like catacombs. It’s kind of…boring. There’s really nothing else to it. The demons sometimes spawn with these red swirly bits, but basically everything else is grey and white. It’s just kind of lame and takes away from the fun. Here you are, shooting demon heads off with your double-barrel death stick, and it feels like you’re being filmed by a pretentious art major.

Finally, the sound design in this game is weird. Running into icicles sounds like breaking a window, crackling fires sound like dripping water, all of the monsters scream at you like you’re a casting agent for Hell’s Idols and this is their big shot. The only good part of the sound design is the gunshots, which are loud and proud baby! They give the weapons a good weight and make them pretty satisfying to use.

So far, so decent

I would recommend WRATH to anyone who enjoyed old school shooters, or anyone who wants a cathartic demon killing experience. When I mentioned not knowing the story earlier, as a funny joke, I truly had no intention of finding out. Playing this game becomes all about the gameplay and all ideas of story really seem pointless.

So, buy WRATH, but I’d advise wait for the full edition. You never know what they might change in the end. This is Early Access after all. Hopefully they will make the environments more interesting, ramp up the graphics and fix the sound design. Even if they don’t though, the game is still just plain fun!

A very fun, very cathartic experience. Could be better presented, but should be played just for the hell of it. Pun fully intended!

Young, talented, funny, hard working, duck-like, consistently punning, the center of a collapsing star, older than time and weird. He is two of these things. Beyond that, I'll never tell...
Previous Twitch Prime to add Gungeon, Ape Out and more
Next Neil Gaiman’s Norse Mythology getting comic adaptation