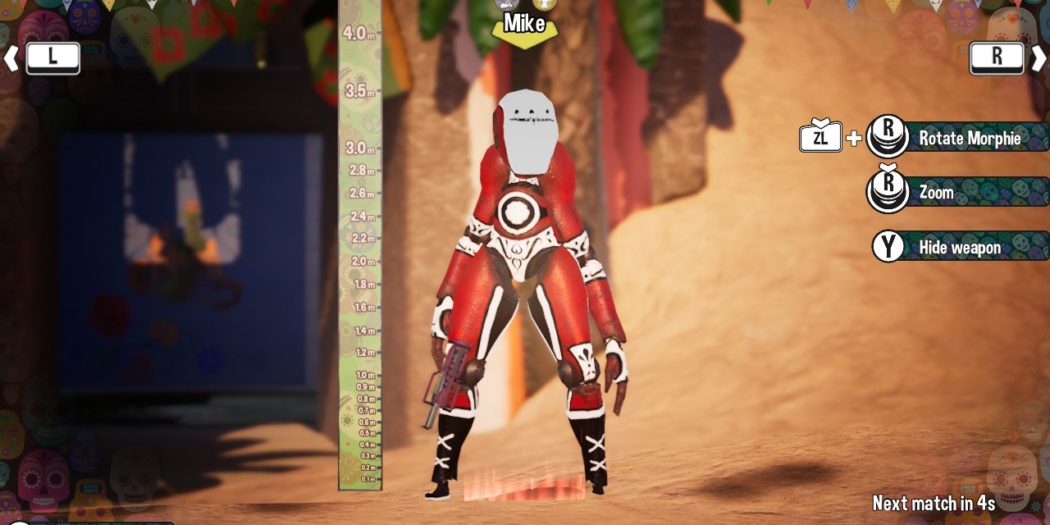 This ain’t your grandma’s siesta.

Morphies Law is back with Morphies Law: Remorphed, a PC launch and Switch game update that greatly expands on the original ideas in all the right ways.

You may remember when I originally played the downloadable Switch title (currently available for $7.99). It was janky. It was fun. It was missing a lot of pieces.

Mostly, that’s because the game is now 3v3. Partly, it’s because Morphies Law: Remorphed is now out on PC and features crossplay between the systems.

Lobbies still don’t fill to the brim just because. Six human players is a rare thing, but other than the names it can be hard to tell which is which when the bots do a fine job.

The changes aren’t insubstantial. Head Hunt isn’t just about delivery anymore: your cannon now has to charge up once the head arrives, meaning your Capture The Flag mode requires some point defense. The line-up of modes is joined by Masster. By being the biggest morphie on the field, your team accrues points. Whichever team gains the most points by the end is the winner.

Due to the way mass switches hands so swiftly, Masster is quickly one of the more enjoyable and entertaining modes in the line-up. The Masster’s position is shown to the enemy at all times, funneling players towards a common point for constant contact and mayhem- even if the Masster wants out at all times.

The new maps are great as well. Los Morphitos introduces tight corridors and interrupted lines of sight, as well as buildings that don’t disappear over time. Climbing the towers puts you out of the way of the brawls below, but can also make you prime pickings for snipers.

La Buttrocketeria adds a unique jet-pack-fueled flavor to the menu, thanks to pick-ups that instantly refuel your butt-packs. A well-planned route can keep you flying forever, picking off the less accurate from above.

Aztwreck is a mix on an old map that puts the whole place in ruins. This rubble can be knocked over by larger morphies, further proving that mass is the most important resource in a game built around it.

Lastly, Fiesta Elevadora starts as a flat sniper’s paradise, before buildings erect across the map for every moment spent standing on them.

Daily and weekly challenges help you to get the most out of your time spent playing. By completing three daily challenges (one of which takes more effort but grants a piñata- aka lootbox), you complete a trophy. Three trophies in a week will grant you an even greater reward. Play a lot, in other words, and you’ll achieve more prizes. Mostly, the challenges are such that a half hour interspersed daily won’t be enough to grant you a new piñata in this way, but it should improve your nut collection.

While challenges certainly improve your collection rate, piñata and nuts are still far between. The rate feels like I was playing for free, and payment was an option. I’m not. It’s not.

But I could play for free, if I wanted, thanks to Morphies Law: Remorphed’s “Fartnite.” This free-to-play version may not have a battle royale, but it does let PC players give it a shot. Dedicated free-to-players can even unlock everything as they go by spending (presumably) nuts.

“Everything” includes sound effects, though, because after a short period of time, they’re all replaced by flatulence. Hilarious? Absolutely. But it’s also a suggestion that you should pony up.

If you’re a fart guy, though, who lives and breathes this kind of humor, then you’ll be happy to know you can still public-lobby-up with your paying friends, with no issue. You cannot, however, join a private lobby with full game players (only other free-to-players).

Not every addition to Morphies Law: Remorphed is game-changing in the same way. Post-game awards like MVP and Bizarro are ultimately meaningless, but nabbing credit for being the most messed-up looking morphie gives you that momentary feel-good validation.

The giant avatars, whose size denotes who is actively winning the match, now have mass for individual limbs, making it more difficult to tell which team is winning at a glance. This change is useful on Mass Heist, where you can see what your opponent is stealing and target those limbs specifically.

The best part, though, of all the new maps, modes, and customization, is the awesome addition of musical instruments to lobbies. While waiting for the next match, every morphie becomes a musician, playing an equipped woodwind, string, or otherwise-instrument to a sweeping tune that pumps you up for the next match. From clapping and percussion to saxophones and bass, every instrument adds a unique sound. Whether you have one or six, the effect only increases, but is always epic.

Morphies Law: Remorphed makes the game infinitely more complete. Problems still persist in rate of progression, and the lobbies aren’t always full of human players (though we’re doing better than week 2), but the additions make their case strongly. Give the game a try with the Fartnite free-to-play version, or jump on that sale price before it goes back to $19.99.

Brutal Gamer's Nintendo Editor began his gaming life a little late- at five years old. But he's made up for it in the two decades since, gaming and writing about gaming with the same passion, fervor, and unrelenting love as his five-year old self.
Previous Loot Crate files for bankruptcy, not shutting down
Next Forbidden Arts (Xbox One) Review