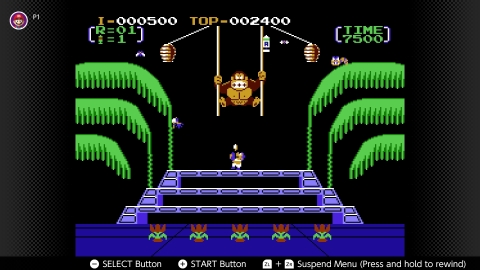 July’s NES games have been revealed for the Nintendo Switch Online exclusive virtual console. But more exciting might be the rewind feature.

Before we get to the actual games, let’s talk about the rewind. Nintendo has revealed that the virtual NES will be getting a rewind feature, p[utting it in line with other retro consoles out there.

Exactly what it sounds like, the rewind ability will allow Switch Online subscribers to rewind their virtual console NES titles. This is done by simply pressing ZL and ZR, and holding them down. That’s it.

Retro mini consoles and game collections tend to offer something like this, so it’s cool to see it here as well. And honestly, any new features added to the virtual NES is worth talking about.

As for the actual free games this month, they’re kinda… meh.

All of the above lands on July 17th.

Jason's been knee deep in videogames since he was but a lad. Cutting his teeth on the pixely glory that was the Atari 2600, he's been hack'n'slashing and shoot'em'uping ever since. Mainly an FPS and action guy, Jason enjoys the occasional well crafted title from every genre.
@jason_tas
Previous Screens and details for Black Ops 4’s latest zombie-fest
Next Marvel legends Ultimate Captain America up for pre-order