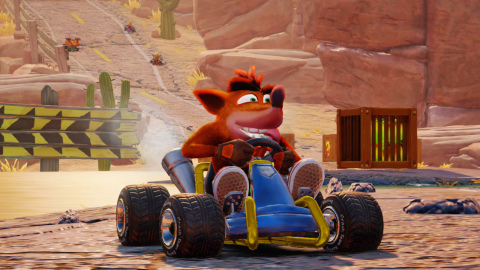 Nintendo Download: Crash the Night with Your Friend Pedro

It’s a huge week for Nintendo fans with a trio of high quality releases. Crash Team Racing, Bloodstained, and My Friend Pedro all hit the Switch.

Get the wallet out

Finally, Nintendo fans are getting another big week on the eShop. This one’s a doozy too, with a nice spread of titles that should appeal to just about any gamer.

Crash Team Racing starts things off. The semi-remake of the PSOne classic sees Crash Bandicoot and friends take to the track for some karting. Then there’s Bloodstained: Ritual of the Moon. Arriving next week, Bloodstained has been a long time coming, and looks to be a worthy Metroidvania… emphasis on the “Vania”.

Finally, My Friend Pedro showcases hyper-violent, uber stylish gunplay in an adventure about a man and his friend… a sentient banana. Don’t ask too many questions.

Jason's been knee deep in videogames since he was but a lad. Cutting his teeth on the pixely glory that was the Atari 2600, he's been hack'n'slashing and shoot'em'uping ever since. Mainly an FPS and action guy, Jason enjoys the occasional well crafted title from every genre.
@jason_tas
Previous Details released on retro handheld Evercade
Next Marvel launching new Spider-Man with JJ Abrams