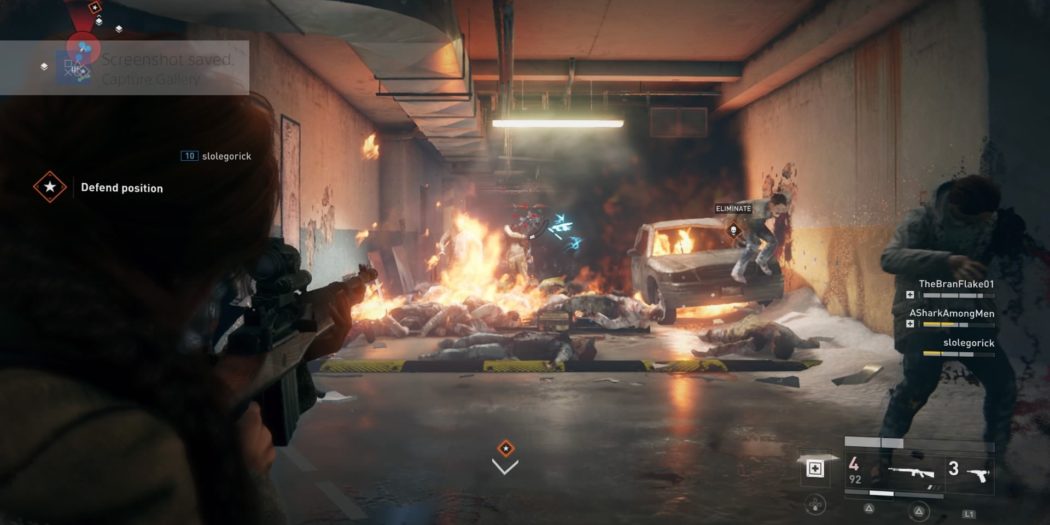 World War Z is the Zombie Shooter for people who want to churn through zombies before being overwhelmed by scores of zombies.

Before release, it seemed like nobody was talking about Saber Interactive’s World War Z.

Evidently I just missed it, because a million copies in the first week later, we’re already hearing about the free updates roadmap.

Two and a half weeks after launch, I’ve put in a solid amount of time on World War Z with my regular co-op group (plus 1 random; there is neither a fourth steady member of my shooter group, nor private lobbies) (subject to change). We’ve played through every stage twice (not counting any of our losses), and are still rearing to go.

The game is set up for short bursts of play, (local or online) co-op rounds of 15-20 minutes. There are 11 different stages (with another coming this summer), each different enough to stand out. Mostly, you sneak your way through hallways and outdoor spaces until the hordes come.

Before they do, though, you’ve got to select your class. There’s something for everyone, from a gun expert to an area of effect damage champion, from a medic to a melee-enthusiast. I’ve only played the Medic, so far, but expect I’ll have maxed out a couple of the others (starting with that melee Slasher) before all is said and done.

Each class has a line-up of abilities, unlocked through persistent leveling. They’re pretty interesting, by the end, and serve to truly specialize your playstyle. Once I could heal myself when healing my allies, all the scarce med-kits went to me. Some classes can make themselves and their allies invisible to the zombies. Some start with powerful heavy weapons. You can’t equip a class’s every skill at once, so you’ve got to make some choices as you level.

Each class also has its own unique equipment. The Medic gives out armor, and the Exterminator carries claymores or incendiary grenades (i.e. incendiary grenades). When used together, it starts to be possible to see how you’ll survive the waves of zombies.

The zombies themselves are chunky. Just gut-squishingly, bone-crunchily chunky, making popping through them with any gun a satisfying and rewarding endeavor. I mean it: blowing these bastards to bits is brilliant, and the more of them there are, the better it feels. Thank goodness there’s hundreds of them on the screen at once during their swarms.

The moments of each stage when you’re tasked to survive and defend are unquestionably the best, as they roll at you in a giant wave, funneling through hallways, chokepoints, and everything else. They throw themselves over cliffs, pile themselves against walls to better climb, and vault over cars in their sickening thirst for your destruction.

Their danger comes from their numbers, as individual zombies go down with one satisfying shot to the head, and little more needed for the body. When you add in the special zombies, only one of which is actually any sort of bullet sponge, and even that has a weak point, the danger becomes a little more real. Lurkers will pin your friends to the ground and kill them unless you’re close enough to save their lives (they all but single-handedly force people to stick together), while Gasbags will leak poisonous gas if they’re aren’t killed by a swift headshot or two.

That’s as crazy as the zombies get.

World War Z is built to be replayed. Zombies appear in randomized locations, so what was once a quiet hallway will become a horrifying gauntlet the next time you funnel through. Different guns appear in different places, each with their own separate levels. Use them enough, and you can buy stronger versions (all but necessary for the later difficulties). Fail to, and you’ll regret it when it’s the only thing available for a horde.

There are some defense structures you can find to change up how you defend a location, and the mix of special zombies changes every time. The game also adjusts to your success, dropping less equipment if you’re doing well, and easing off on the numbers of zombies when you’re struggling to get anywhere.

In other words, no round is ever the same.

Story-wise, each “episode” of three or two stages is pretty basic. Four people are trying to escape the horde in one way or another, whether by boat or helicopter, or otherwise. When you beat a stage with one of them, you can view their introduction video, giving you one more thing to change up as you go through the maps. Otherwise, don’t expect a riveting tale of loss and sacrifice.

This is a round-based slaughterhouse.

I’m not going to lie: World War Z is exactly the game my co-op group has been waiting for.

Partly because we’ve been pining for it since E3 2018 and were tentatively interested the year before that.

Mostly because it presents those moments where you and your friends are staring down a zombie hoard as it begins to pile onto your screen in seemingly insurmountable numbers, and you simultaneously think, “This is how we die,” and “Bring it on.”

We still have 2 difficulties to go.

Brutal Gamer's Nintendo Editor began his gaming life a little late- at five years old. But he's made up for it in the two decades since, gaming and writing about gaming with the same passion, fervor, and unrelenting love as his five-year old self.
Previous Stranger Things Volume #1: The Other Side (Comic) Review
Next Bloodshot: Rising Spirit #7 (Comics) Preview