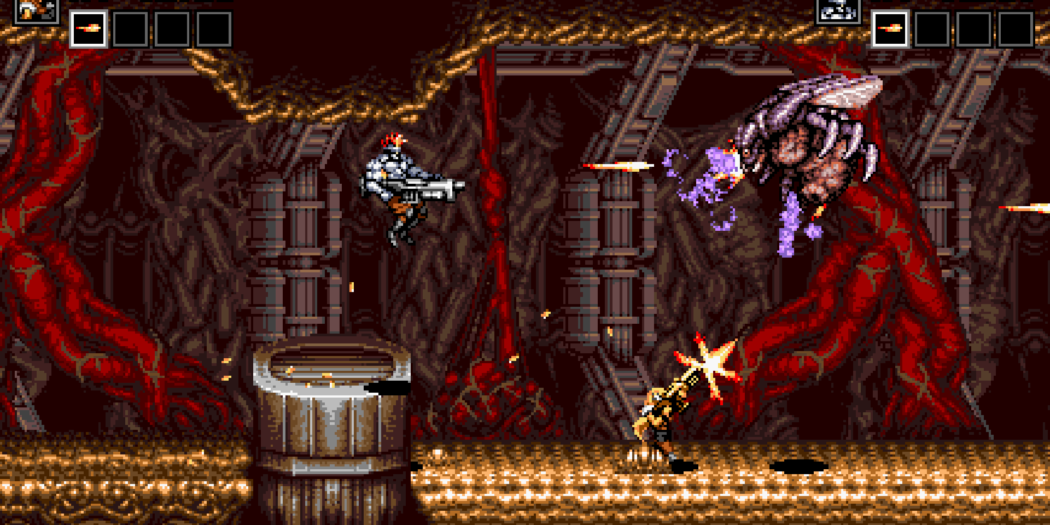 If you’re a Contra fan, then you’re going to want to check out Blazing Chrome. Now the upcoming shooter has been confirmed for the Xbox One.

There hasn’t really been something like Blazing Chrome in years. Actually, the last time I can recall something like this off the top of my head, it was on the SNES.

The bottom line is that it’s been ages since there’s been a hardcore, side-shooter. And it doesn’t much seem like any of the bigger studios are planning a genre resurgence. Thankfully, there’s developer Joymasher. And, of course, their latest title Blazing Chrome.

Not that this game is a new announcement on the whole. We’ve known that the blastathon was coming for the Nintendo Switch, PS4, and PC. Now however, it’s been confirmed for the Xbox One. And if you’re a gamer who enjoys any of the above platforms, you’re going to want to keep your eye on it.

Blazing Chrome harkens the golden days of old school side-scrolling shooters with intense, bullet-riddled screens of action that’s still easy to pick up and immediately understand. Players set out with a friend or Rambo style to clear hordes of killer robots in a retro-inspired vision of Earth’s downfall, wielding a suite of cutting-edge weaponry, awesome vehicles including hover bikes and mechs, and an unending stash of ammo against the world’s greatest threat.

Hyped for some sore thumbs? Get ready, Blazing Chrome launches for all of the above platforms this spring.

Jason's been knee deep in videogames since he was but a lad. Cutting his teeth on the pixely glory that was the Atari 2600, he's been hack'n'slashing and shoot'em'uping ever since. Mainly an FPS and action guy, Jason enjoys the occasional well crafted title from every genre.
@jason_tas
Previous Marvel goes back to school for Spider-Man: Reptilian Rage
Next LEGO DC Super Villains gets Batman: The Animated Series DLC