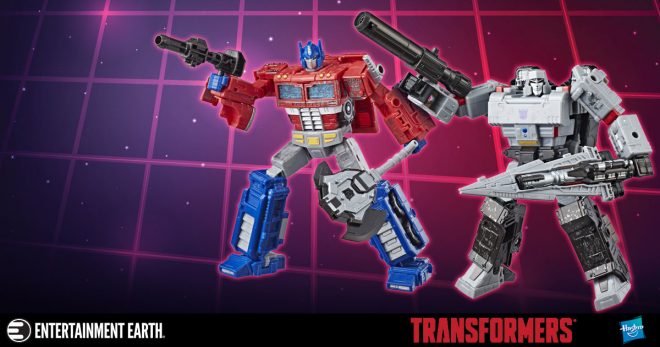 If you’ve been collecting the Transformers toys from Hasbro over the last few years, then you know hoe great they’ve been. The trilogy of Combiner Wars, Titans Return, and Prime Wars has energized the brand. It’s also produced some of the best classically-styled Autobots and Decepticons ever. That’s bar-none right there.

From the massive Fortress Maximus and Trypticon down to the likes of Bumblebee and Brawn, the figures have been amazing. Hasbro even reintroduced Headmasters and Pretenders (in a way)! How awesome is that? Yes, I think it’s safe to say fans have been pretty happy with them. I know I have anyway.

But now that that’s all over, what’ve we got? That question is answered by Siege of Cybertron.

You may have an Optimus or a Megatron toy somewhere, but you need these new ones. Trust us. The Transformers Generations Siege Voyager Wave 1 Case does not disappoint! Both leaders are covered in battle-damage, include 2 weapons each, and have an exceptional range of articulation in their highly detailed robot modes. The Cybertronian vehicles look a little bit like some previous Earth forms but are different enough to be a lot of fun. Optimus and Megatron borrow heavily from classic toy and TV appearances, giving you what may be two of the most amazing figures yet. And they can power up with other smaller Siege Battle Masters, Weaponizers, and Micromasters (sold separately)! Don’t delay – transport them to your area via space bridge today! 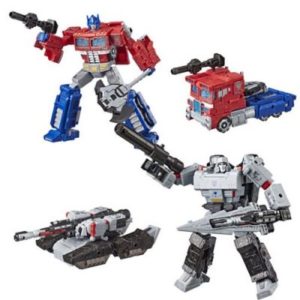 I don’t exactly know the fiction behind Siege, but it looks to me like it might be a prequel, focusing on the Transformers before they left their homeworld. It also looks pretty darn cool, with even more faithful designs to the 1980s originals.

Right now, Optimus Prime, Megatron, Hound, and a few others are the offerings, but that’ll presumably grow. From the looks of the smaller packs too, the Targetmasters are back, which is another amazing nod to the classics. There are a few names in this initial volley of figures as well that I’m unfamiliar with, so I’m thinking there might be some new characters sprinkled in. We’ll see as the line rolls on.

Jason's been knee deep in videogames since he was but a lad. Cutting his teeth on the pixely glory that was the Atari 2600, he's been hack'n'slashing and shoot'em'uping ever since. Mainly an FPS and action guy, Jason enjoys the occasional well crafted title from every genre.
@jason_tas
Previous Nintendo Download: Gobble Up Great Deals on Nintendo eShop!
Next Meet Rampage, Fury’s steed in Darksiders III