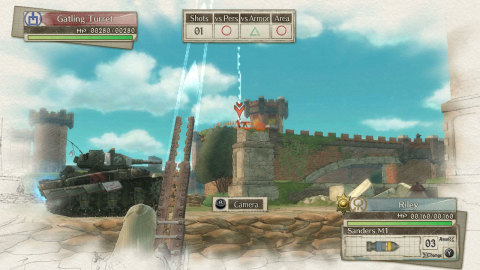 Valkyria Chronicles 4 hit the Nintendo Switch, and it just might be the return to form for the series that you’ve been looking for. This one’s a winner.

Let me start of this review by saying that this game isn’t Valkyria Revolution. And I should know, because I reviewed that game as well. There’s a reason that I keep volunteering for Valkyria reviews too, and that’s that I’ve been a fan of the series ever since I got the chance to play the original on the Playstation 3.

I love both the aesthetics and the overall story. At its best, Valkyria offers characters that are relatable and believable, mainly because of the excellent localization and voice acting. So what is Valkyria Chronicles 4? Well, simply put, it’s everything the fans have wanted ever since the original game.

Great looking, if not perfect

The game looks great and performs well on the Nintendo Switch. Dock mode makes everything look extra crisp and smooth. Handheld mode on the other hand, doesn’t really show any negative effect worth mentioning on the game.

It is worth noting that the game looks great even though it looks almost exactly the same as Valkyria Chronicles did when it was originally released. That may not be a negative though as it is Valkyria’s unique aesthetic that attracted people to it in the first place.

My only gripes with the visuals are the character designs. But don’t get me wrong, the cast looks great. It’s the NPCs and side-characters that would never win a “spot the protagonist” game that bothers me. A majority of the enemies look so similar that I felt that I was fighting the same folks from the first level to the end. Of course, there are variations here and there. But there were not enough to make me feel like I was fighting an actual war against actual enemies.

In terms of music, Valkyria Chronicles 4 kind of just follows along with what’s come before. The music isn’t really all that good, though it isn’t all that bad either. My main problem is that it feels and sounds way too much like the original’s soundtrack. They could have done better. The music does set the tone, albeit in a simple “it’s ok” way.

Terrific gameplay that harkens back to the original

The core gameplay of Valkyria Chronicles lies with strategy, quick thinking and resource management. What was awesome with the original Valkyria remains the same even in the 4th (numbered) entry. There are no major changes to the game in terms of mechanics, though the controls and the feel of the game have been refined even further.

Also, it’s worth noting that the game by itself is at least 50 hours long. There are tons of side quests and other secrets and achievements waiting to be discovered. If you’re into that sort of thing, then Valkyria Chronicles 4 certainly won’t disappoint you.

I’ve been playing the game for over 110 hours now and I still find myself discovering something new every now and then. I think that’s pretty amazing for a game like this.

Between the PC version, console version or the Nintendo Switch version, my personal favorite is the Switch. Granted, I did not spend more than 5 hours on the other consoles/PC but I do know how I want the game to feel. In my opinion, the Switch version of Valkyria Chronicles 4 is the definitive way of experiencing the game. So if you have a Switch, then by all means, load a copy into your console.

All in all, Valkyria Chronicles 4 is a great game that remains true to the classic – almost to a fault. It would have been a perfect game if it actually added something new to the Valkyria lore. Instead it feels like certain tropes were simply re-used, and other elements were recycled.

One thing I will say, however, is that the game is closer in tone to Valkyria Chronicles 3 than the original game. It’s less happy in certain ways, and it’s more realistic in the most horrible way possible, and I mean that in a “good” way. You are fighting a war, after all.

All said, Valkyria Chronicles 4 is an extremely well-made game with some flaws here and there; it is the game, however, that fans have been waiting for all this time. I look forward to Valkyria Chronicles 5, if ever that comes into fruition in the future.

All said, Valkyria Chronicles 4 is an extremely well-made game with some flaws here and there; it is the game, however, that fans have been waiting for all this time.