LEGO had a nice showing at Comic Con, with some surprising new sets. Not just movie stuff, there were also some impressive comic kits.

Let’s start off with Star Wars though, since it was the largest presence in the booth. Not only were there new sets shown off, but the ones that are available right now were overflowing at the shop portion of the LEGO experience.

Extra cool was the train from Solo (which I figured we weren’t going to see more from), and the Episode 1 Podracer. Of course, the re-releases of the iconic TIE Fighter and X-Wing, and Jawa Sandcrawler were also pretty neat.

The Sandcrawler felt a lot smaller than the original set to me. Though I’m not sure if that’s just my faulty memory. 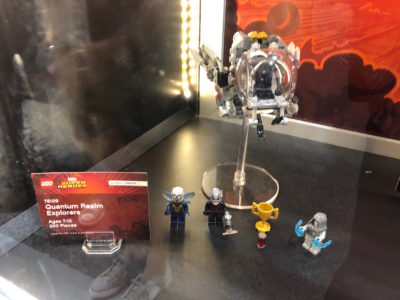 The Marvel stuff on display was great, but all stuff that we’ve already seen (outside of the above Ant-Man kit). I’ve actually been relatively unimpressed with LEGO’s Marvel movie offerings as of late. Actually, add their comic book-centric stuff too. the DC shelves on the other hand, were excellent.

LEGO had Aquaman out there, front and center, but that was far from it. There were also a pair of Batman sets (of course), one of which is remote controlled! An app-controlled LEGO Batmobile? Yes, I will take one of those.

Seriously, how awesome is that? This is absolutely being added to my collection.

Jason's been knee deep in videogames since he was but a lad. Cutting his teeth on the pixely glory that was the Atari 2600, he's been hack'n'slashing and shoot'em'uping ever since. Mainly an FPS and action guy, Jason enjoys the occasional well crafted title from every genre.
@jason_tas
Previous SDCC 2018: DC collectibles showcases Animated and Essentials figures
Next Episode 46: SDCC Wrapup