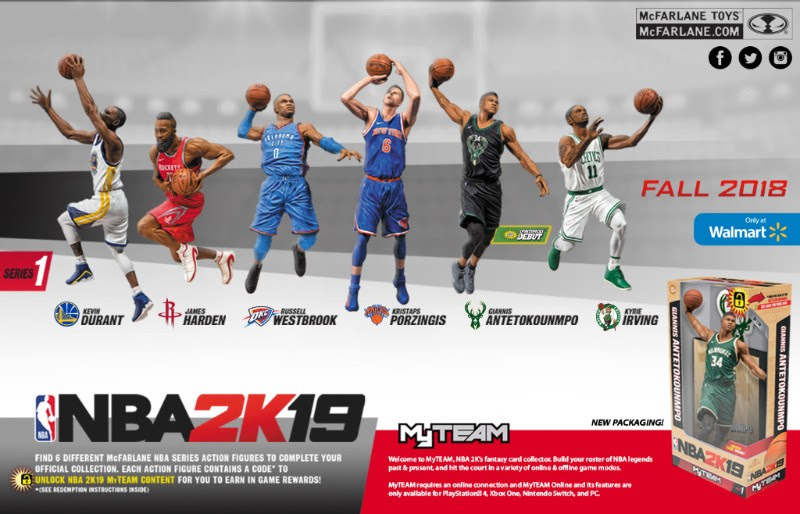 McFarlane is expanding it’s lineup of sports properties. A fresh basketball series, made in partnership with 2K Games, is on the way.

Yes, McFarlane is already well known for making some of the best sports-themed figures out there. Their ongoing series’ of pro-level figures just might be the best ever forged in plastic. Now they’re about to move into the realm of the NBA 2k19 video game.

“Joining with NBA 2K is exciting, that franchise has evolved into a juggernaut, not just with the NBA but with video games altogether, and to have our figures associated with it, just feels like a natural fit,” said Todd McFarlane, founder and CEO of McFarlane Toys.

Each figure will be sculpted with the typical McFarlane level of detail, and also include a little bonus for the game itself. Packed in with every figure will be a Locker Code that will be good for one in-game “McFarlane Pack”. Those packs will hold one Ruby Card, which will feature the six players in the inaugural figure set.

If you’re wondering who’s included, it will be:

These will cost you $24.96 USD each, and will be available only at Walmart stores. Watch for them this fall.

Jason's been knee deep in videogames since he was but a lad. Cutting his teeth on the pixely glory that was the Atari 2600, he's been hack'n'slashing and shoot'em'uping ever since. Mainly an FPS and action guy, Jason enjoys the occasional well crafted title from every genre.
@jason_tas
Previous SDCC 2018: Fallout trading cards on the way from Dynamite
Next SDCC: Godzilla: King of The Monster Trailer