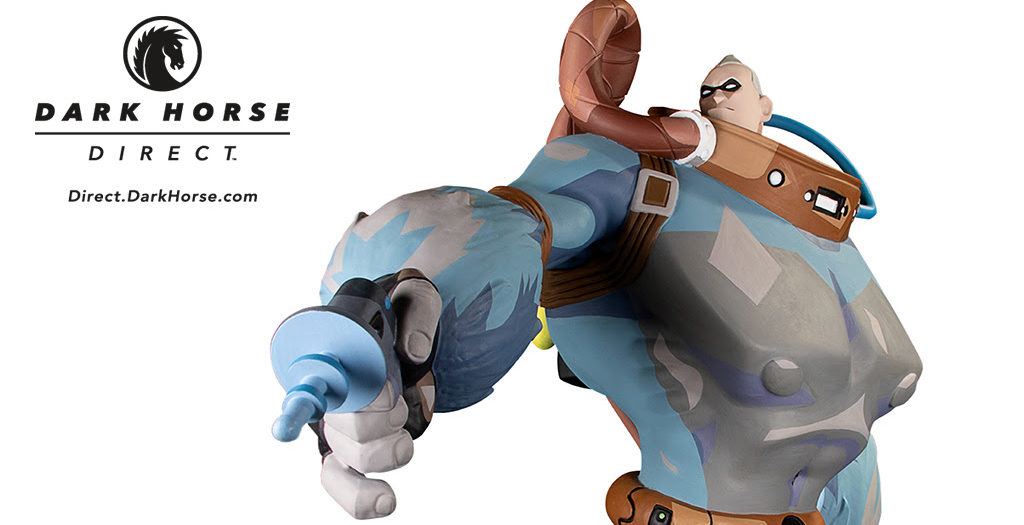 Selling directly to your customer and eschewing the realm of retail is nothing new, but it sure is for Dark Horse Comics.

There is an ever-growing cross section of companies choosing to sell goods directly to their consumers. Not that they’re taking over though. Brick and mortar and internet-based retailers are still the majority of outlets for collector toys out there. But there are more and more companies going another way.

Head over to Kickstarter and take a look at toy lines like Eagle Force. Yes, they’re going to retail too, but these figures got their start selling right to fans. Heck even the mighty Hasbro bought in for a bit of it, with it’s crowd-funded Jabba the Hutt Sail Barge. The Four Horsemen do it all the time too, and their Mythic Legions lines are wildly successful.

So it probably should have been expected that a major company would try it eventually. Enter Dark Horse Comics, who’s kicking things off with a series of cool collectibles. There’s no subscription fee for what Dark Horse has planned either, which is very nice indeed.

But they will be selling stuff right from their very own website.

“Dark Horse Direct is the latest example in Dark Horse’s long history of innovative business practices,” explained President and Founder Mike Richardson. “Dark Horse constantly looks for new ways to inspire passion in our fans in every format possible, which is why a direct-to-consumer program is the most logical move as we continue to grow our business and cultivate new fans.”

So what’s first up on the docket? A fan favorite from Game of Thrones, that’s what. Tormund Giantsbane is leading the list of exclusives from the publisher, but he’s not alone. Two more collectibles have also been announced, and are either available for pre-order now, or will be soon.

Scroll down for those, and then click over to the store to place your order.

The first Dark Horse Direct offering available is the Game of Thrones®: Tormund Giantsbane Figure! Available for pre-order now, Tormund retails for $40.00 and is due to ship to website customers in early August 2018. As a bonus, 300 of the figures will also be available for purchase in the Dark Horse retail booth #2615 at San Diego Comic-Con!

Dark Horse Direct presents a throne fit for the true leader of Westeros with the Game of Thrones: Iron Throne 18” Replica. With HBO® Licensing and Retail and the talented artisans at Gentle Giant, DH Direct has replicated the seat of the kings of Westeros. This replica retails for $499.99 and will ship later this year, opening for pre-order in the coming weeks.

Jason's been knee deep in videogames since he was but a lad. Cutting his teeth on the pixely glory that was the Atari 2600, he's been hack'n'slashing and shoot'em'uping ever since. Mainly an FPS and action guy, Jason enjoys the occasional well crafted title from every genre.
@jason_tas
Previous Splatoon 2 Octo Expansion Makes a Splash
Next Both Overlord games are now backwards compatible on Xbox One