There’ll be more, but Factory Entertainment has made official their first three exclusives for the big Con in July. The first two are DC Comics based goodies, and the third is from a film classic, Back to the Future.

Whether you call it San Diego Comic Con or Comic Con International, the west coast’s biggest pop culture convention is still one of the biggest in the world. Year in and year out, it’s also home to some of the coolest retailer exclusives around. This year will apparently be no different, as Factory Entertainment has fired the first shots with some truly impressive stuff.

The first item is from a fan favorite film, and part of the DC Expanded Universe – Wonder Woman. The God Killer sword is presented here in limited edition style. Differing from the mass marketed version, this edition is not weathered, and appears as though it was just crafted in the fires of Hephaestus’ forge.

Next up is a cool Batman mini-statue, in 1:32 scale. Don’t let the size fool you though, because this piece is solid metal and weighs a surprising 11 ounces. So maybe make sure you don’t pack too much, if you’re going to be throwing this bad boy in the luggage for the return flight.

And the third item? That’d be the Time Control Keychain, modeled after the Back to the Future Delorian’s control panel. The chain includes a reproduction of the actual panel itself, as well as a cool image of the car, and the BTTF logo. Neat stuff.

All of the above it strictly limited, with just a few hundred pieces made of each. So if you want any of this stuff, then the old Con adage applies – get to the booth early. Only in this case, ordering online works too. You can order up any of these items right now, and set them to be picked up at the show.

If you do, you’ll actually get a really neat Aquaman pin too, exclusive to SDCC this year. Very nice Factory. 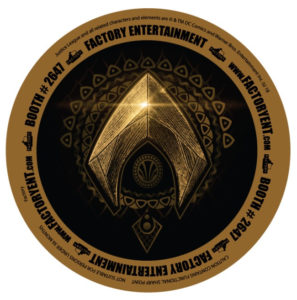 Jason's been knee deep in videogames since he was but a lad. Cutting his teeth on the pixely glory that was the Atari 2600, he's been hack'n'slashing and shoot'em'uping ever since. Mainly an FPS and action guy, Jason enjoys the occasional well crafted title from every genre.
@jason_tas
Previous Creepy Road (PC) Review
Next Far Cry 5’s Hours of Darkness DLC Finally Get’s Release Date