Home / E3 / Nintendo’s lays out its plans for E3, will include Splatoon and Smash championships

Nintendo’s lays out its plans for E3, will include Splatoon and Smash championships

E3 might be for announcements and fresh looks at what’s coming soon, but Nintendo will also be playing up some of it’s standards too. This coming show will include championships for both Splatoon 2 and the new Switch version of Super Smash Bros.

What are you looking forward to seeing at June’s E3 show from Nintendo? A glimpse of Metroid? A new Super Mario title? Well, whatever it is, you’re going to get a look at some games you probably know quite well too. Nintendo has announced it’s official slate of happenings for the show, and it includes a pair of gaming events.

To be honest, I have no idea if this is a new thing for the company or not, but it is kind of interesting. Much like EA, who has a consumer event during the show, and E3 in general (which has opened up the floor to gamers as of last year), Nintendo will be playing up to the fans at this year’s convention. The company’s Direct presentation and Treehouse will be sandwiched by the Splatoon 2 World Championships and the Super Smash Bros 2018 Invitational. And that Smash tourney? It’ll be using the new Switch version of the game.

Here’s an official bit about the tournaments:

The festivities kick off with two days of high-level competitive action at the Belasco Theater in Los Angeles. On Monday, June 11, from 3:30 p.m. to 6 p.m. PT, qualifying teams representing the United States/Canada, Japan, Europe and Australia/New Zealand will ink their way to glory in the opening rounds of the Splatoon 2 World Championship tournament. The finals will take place the following day on Tuesday, June 12, immediately followed by the Super Smash Bros. Invitational 2018 tournament, which will pit invited players against each other in the recently announced Super Smash Bros. game for Nintendo Switch. A few fans who come dressed as their favorite Nintendo character on June 12may be chosen to play the upcoming Super Smash Bros. game on stage in exhibition play. Tickets will be issued on-site at the Belasco Theater in Los Angeles each day of the event. Additional details about how fans can attend in-person will be shared in the future. All the action from both days will be streamed live on https://e3.nintendo.com, YouTube and Twitch. 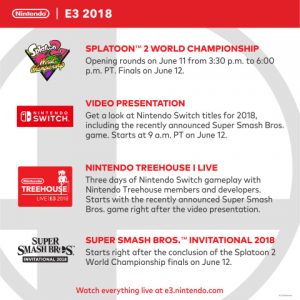 So that’s about that, but there will be plenty of new stuff to hear about too. And as usual, you’ll be able to do that from anywhere, since Nintendo will be doing another Nintendo Direct instead of a traditional event. Though, at this point I think it’s fair to say that the Directs are a traditional event. They’ve been doing them for years after all.

Switch games will be the main course there, with no 3DS mention anywhere in the press release. Here’s what to expect:

At 9 a.m. PT on Tuesday, June 12, Nintendo will debut a video presentation* featuring games releasing in 2018, including the recently announced Super Smash Bros. game for Nintendo Switch. Right after the presentation, Nintendo Treehouse: Live | E3 2018 will begin three days of live gameplay, appearances by developers and an insider look at games, starting with the upcoming Super Smash Bros. game for Nintendo Switch. Everyone can watch the video presentation and Nintendo Treehouse: Live | E3 2018 at https://e3.nintendo.com, YouTube and Twitch.

Visit the booth (or the store), play some games

“Every year we take a look at E3 and craft the best experience for our fans, regardless of whether they are attending the show or watching from afar,” said Doug Bowser, Nintendo of America’s Senior Vice President of Sales and Marketing. “We expect that each of our E3 activities will give an additional boost to the already strong momentum enjoyed by Nintendo Switch.”

Splatoon 2 and Super Smash Bros won’t be the only games that Nintendo will have in playable form. The company has also announce that they’ll have a selection of brand new titles on display at the booth, with will include the new Smash. These won’t be all first-party either, as you can expect to see (and probably play) “some of the most noteworthy upcoming third-party games on Nintendo Switch”. Those titles will be “featured across several Nintendo activities throughout the week.”

Can’t get to the show? Then maybe the Nintendo flagship store in NYC is more doable. Streaming content will be available there, including the Splatoon championships’ first rounds. Much more exciting than that though, is that fresh titles will be on hand too; “June 12-15, visitors to the store will be among the first to play a selection of games shown at Nintendo’s booth during E3.”

Lots to look forward too, and not too far in the future.

Jason's been knee deep in videogames since he was but a lad. Cutting his teeth on the pixely glory that was the Atari 2600, he's been hack'n'slashing and shoot'em'uping ever since. Mainly an FPS and action guy, Jason enjoys the occasional well crafted title from every genre.
@jason_tas
Previous Star Wars Black Series Darth Vader helmet detailed, arrives next month
Next Second wave of Avengers: Infinity War Minimates inbound, land on May 1st