Home / Comics / Rasputin: The Voice Of The Dragon #5 (Comic) Review

Rasputin: The Voice Of The Dragon #5 (Comic) Review

Bruttenholm and Sandhu have found their way into the tomb of the Grand Master Albert Mayhew of the Heliopic Brotherhood of Ra. Rasputin and several others have beat them to the location. What comes next will clearly be something mystical.
If you missed it, our coverage of Rasputin #1, #2, #3 and  #4 are available for you to catch up on.

Tomb Of The Grand Master 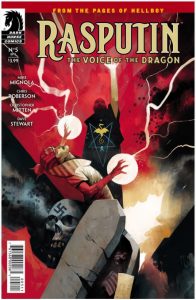 Dr. Bruttenholm is taking in everything that is going on around him, even if he is struggling to believe it. The automated dog guardians, and now there is a man standing over an alter, spewing unknown incantations. Sandhu finds himself beside the villainous Rasputin, though not for long. Rasputin, with all his mysterious ways, is able to subdue Sandhu rather quickly.

Other Powers At Play

Rasputin and his team stand back and watch, while the mysterious English ghost they have been working with is channeling mystical powers to achieve successes that even Rasputin alone claims to be unable to. Kroenen and Rasputin gaze as the ghost becomes consumed with the power of a greater entity. Bruttenholm proves ineffective in stopping the SS above the altar, working the power station, and like Sandhu, is knocked unconcious before they were able to put a stop to what was about to occur. As the ghost was overtaken, bystanding Nazi that were too close to the altar were also consumed by the dark powers.

The spirit is interrupted before his ritual is complete, and the man inside the tomb arises, clutching an ancient tablet to him. Condemning the spirit for his foolish works, the newly appeared undead claims that judgement has been passed. We see the spirit fading away, but before he is able to disappear completely, the undead grabs the ghost, and informs him of what he is about to endure. The undead body then disintegrates to bone, leaving only the tablet remaining.

Rasputin claims the tablet written in some ancient pictographic language, and leads his team away, with no care for Bruttenholm or of the havoc that has been wrought to the surrounding location. Sandhu is an unfortunate casualty in this foray, and the end result is certainly not a pleasant one. The book ends with Rasputin studying the tablet, and calling for the Ogdru Jahad. We have learned from past books that the Ogdru Jahad are the bringers of the end of the world.

This dark story following Rasputin’s rise has been quite a tale, and I for one have enjoyed it. So often the stories are told of the hero winning, and the bad guy’s plan getting foiled. To see Rasputin get away with such dastardly behavior, and seeing Rasputin and Kroenen throw the heroes around like puppets is a refreshing spin on things. I enjoy the alt titles that Mignola and company keep us entertained with.

RASPUTIN: THE VOICE OF THE DRAGON #5

Rasputin is able to get his hands on a strange artifact. We don't know specifically what it does, but we know it can't be good. Bruttenholm has a new assignment, and Sandhu falls by the wayside. Not every story has a happy ending.

A fan of media on multiple platforms, I am always watching or playing something! Who knows what I will be on to next?
@mackeyp42
Previous Jakks Pacific’s first Mega Man figure goes up for pre-order
Next Watch this video for Marvel Strike Force on mobile and you’ll be helping pets in need

Was it “the best year of Spawn ever” in 2021? McFarlane and Image Comics have …