Home / Action Figures and Toys / One:12 Collective Catwoman is now up for pre-order

One:12 Collective Catwoman is now up for pre-order

Mezco’s first take on DC Comics anti-hero (and future wife of the Dark Knight) Catwoman is ready for pre-order. One of the few female characters in the line, Selina is looking fantastic.

Mezco was recently asking for “favorite female” characters on social media, and that’s a good thing. Mainly because I assume it means that there are more female heroes and villains on the way. I kind of really want to assemble an X-Men team, so I need a 90s Jean and Rogue at the very least.

As it stands right now though, we’ve got a movie Wonder Woman figure hitting some time this year, and this lady. As the first female character from the DC comics universe joining the One:12, she’s looking awesome. 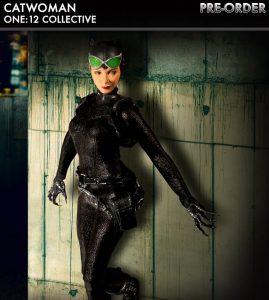 Catwoman is set to arrive in the September to November timeframe (this year), and will include:

Jason's been knee deep in videogames since he was but a lad. Cutting his teeth on the pixely glory that was the Atari 2600, he's been hack'n'slashing and shoot'em'uping ever since. Mainly an FPS and action guy, Jason enjoys the occasional well crafted title from every genre.
@jason_tas
Previous Sega Genesis/Mega Drive Classics compilation coming to consoles and PC
Next Warhammer: Vermintide 2 (PC) Review