Mezco Toys did not disappoint at this year’s Toy Fair in NYC last week. The company showed off a bevy of awesome new One:12 Collective figures, including that amazing Sovereign Knight (modern Batman).

Is the One:12 Collective the best superhero toy line out there right now? If there is, I don’t know what it would be. Sure Marvel Legends is a great series, and DC’s Multiverse is getting much better. And both of those series’ go deep on characters too, offering loads of heroes and villains, both major and minor.

But neither one has the quality that Mezco’s premier line does. Of course, neither one offers the stable of characters that the One:12 does either. I’ve said before that the One:12 Collective is like Mego if Mego was actually good, and I still think that’s very applicable.

Not that Mego wasn’t solid for its time, and the fact that it offered both Marvel and DC (and others) characters was something that we wouldn’t really see again till the One:12. But let’s be honest, outside of super-high-end collector lines, nothing can hold a candle to what Mezco is making right now in terms of quality.

Yes, there was some stuff that we’d seen before in Mezco’s cases, but a bunch of it was fresh. Better still, almost all of it is coming up fast. That’s in stark contrast to the slow time to market that the One:12 was starting to be known for.

Well  you can forget that, cause these are almost all coming up in the summer through Holiday 2018 timeframe. Good stuff. Or maybe not, depending on your bank account. Either way that pendulum swings though, you’re going to want pretty much all of these, I can almost guarantee that.

Here’s the best of what was in the booth at Toy Fair:

There’ll also be a 6″ version by the way, if this one’s (surely) massive price proves a bit too much. 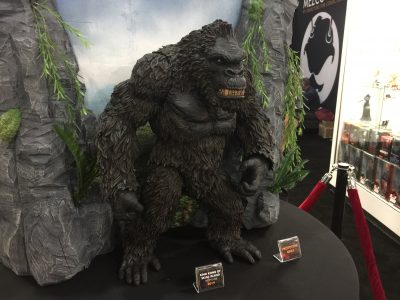 Jason's been knee deep in videogames since he was but a lad. Cutting his teeth on the pixely glory that was the Atari 2600, he's been hack'n'slashing and shoot'em'uping ever since. Mainly an FPS and action guy, Jason enjoys the occasional well crafted title from every genre.
@jason_tas
Previous Soul Calibur VI reveals two new fighters with Ivy and Zasalamel
Next March 7th Valiant Previews: Bloodshot Salvation goes dark in issue #7