Logan gets his brown duds in this first-revealed, second-shipped One:12 Collective Wolverine figure from Mezco. And yes, the shorts are much better than in that preview pic.

Mezco has exceptionally good timing with this one. Wolverine (the proper one) has just returned in the pages of Marvel’s comics, and the X-Men in general are going through a major revival. There are also a few X-movies in the near future, and Logan himself is up for a few Oscars for last year’s flick of the same name.

And that’s all without saying that the mutants are back in the Marvel film fold, thanks to Disney buying Fox’ film division. So the chances of the X-Men, and Wolverine himself, appearing in a movie opposite the Avengers are pretty darn high.

Yep, it’s a good time to be an X-fan. Add to that this figure right here, because it’s pretty darn good. Not the best of the One:12, but definitely a solid figure that deserves a place in any One:12 collector’s menagerie.

Let’s start off by taking a quick look at the packaging. As usual as of late, it’s sans fold-out panel. I’m kind off getting used to that to be honest, though I still say the old design was way cooler.

As for the color scheme, Mezco chose brown with a big, black and yellow X on the front. It’s… okay. There’s nothing all that great about it, and it pales in comparison to others in the line, but it gets the job done.

I really don’t care for that basic shot on the back though. It makes the figure look somewhat unappealing.

Thankfully this Wolverine is anything but that, and really shines in spots. For that reason I honestly hate to keep ragging on it. But it’s kind of the point in a review to be honest, so I have to point out that the accessories are a mixed bag.

If you missed it last year (I did), the yellow and blue version of Wolverine didn’t have this issue. Packed in with Mezco’s NYCC (and website) exclusive was an alternate unmasked head portrait. That’s something that this release does not have.

I honestly like the katana better than the Japanese mask that the former version came with, but not having that alt-head hurts. One of Wolverine’s staple looks is costumed, but with the mask either pulled back or not present at all. Logan isn’t exactly protecting a secret identity, so he’s almost just as apt to not have the mask as he is to wear it. Not having that option for display is sort of crummy. 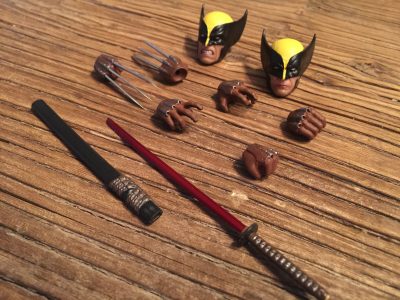 Outside of that, you get the standard One:12 stuff included.

Two head sculpts are in the box (one gritting his teeth and one at rest), and you get three sets of hands. One pair is open, one has a closed fist/grasping hand combo, and the last has his claws popped.

Obviously, that’s the coolest set and what I have him displayed with. The claws look great too, and have a nice metallic look. I was bummed out to find that they’re not actually metal, but that’s not really that big of a knock… or maybe it is. To my chagrin, some of the claws were pointing in different directions when I removed Wolvie from the box.

I managed to mostly fix that issue by gently bending them into place, but it shouldn’t have been a problem at all. I don’t expect that kind of stuff from the One:12. Actually, I don’t expect it from any line with this kind of a price tag. Maybe that’s just asking too much, but that’s my feeling. 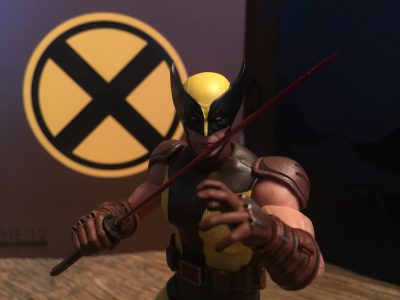 But outside of the claws issue, how’s Logan look? Honestly – awesome.

The brown suit is my favorite look that Logan has sported over the years, so I’m thrilled that Mezco went with it for the staple Wolverine figure of the One:12 line. That said, I actually like the revised version that made it brown and orange better. That’s not this though, and that’s okay because he looks terrific.

I particularly like the changes that Mezco made to give the suit a little more detail than it had in the comics. The brown parts of the costume have a leathery feel to them, while the yellow bits have a more traditional spandex-y look. The result is a costume that retains every bit of the comic book cool, while infusing a little real-world workmanship.

Oh, and those oft-maligned shorts? As I mentioned, they’re way closer to the comics now. Long gone are the “biker” shorts that the promotional materials (including the retail box!) and prototype figure had. If you’re unfamiliar, there was so much fan feedback about that element, that Mezco actually took note and changed the figure. Always nice to see that a company listens attentively to its customers.

The articulation is what you’d expect from the One:12 Collective. That is to say that it’s great. There’s plenty of movement to be had, and loads of posing potential. Honestly though, that’s nothing new, as the One:12 is almost unmatched in terms of articulation.

That’s especially true when you take into account that these are no simple plastic figures. There’s a lot to a One:12 figure, and to get all of it working to a point that nothing hinders movement is sometimes a wonder. 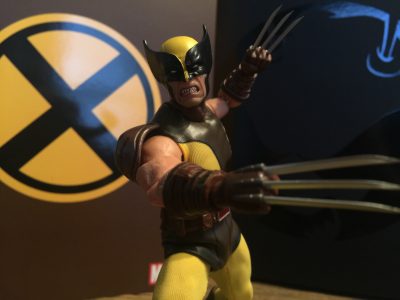 I will say this though, the shoulder pads, while they look great and I like the decision to go with them, tend to fall off a lot. Like, a lot. Specifically, the right pad comes looks from its housing if you move the arm in almost any direction. You can’t even remove them, since what they clip onto is moulded into the shoulders themselves. If you wanted to take them off, it’d involve a lot of action figure surgery. And it’d be permanent.

Good thing these aren’t meant to be played with.

What’s to point out here? This is a One:12 figure. It’s cast in a 6″ scale, right? Yes and no. Yes, this Wolverine is very much in the 6″ scale, but that means that he’s shorter and stockier than pretty much any other One:12 figure. At least, any that I own.

It’s great that Mezco took the extra time to craft a body for Wolvie that actually fits with his comic book persona. Some fans might not know, but Logan isn’t Hugh Jackman. He’s supposed to be short, so much so that his arch-nemesis Sabertooth regularly refers to him as a runt. 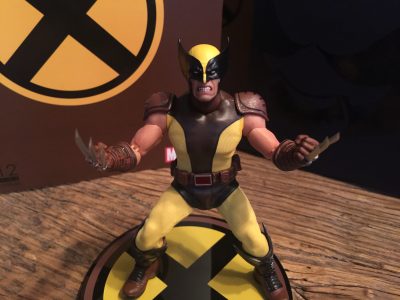 Once again, Mezoc comes through big time with the One:12.

And that’s really something that you can about the whole line. I know I’ve basically said this a few times here, but it’s an excellent series of action figures. One:12 Collective is like Mego for the new millennium, if Mego figures were actually super-well made and looked awesome.

Wolverine is right there with the majority of the line too. True he’s not without issues. There are a few things that I flat-out don’t like, and the claws being bent in six different directions just shouldn’t happen.

Still, whether you’re a fan or you just like the X-Men in general, Wolverine is definitely worth adding to your collection.

The costume isn't without its issues, but looks great - 87%

Poseability and sculpting are terrific (as usual) - 90%

The accessories are good, but where's my unmasked head? - 79%

The first X-Man in the One:12 is almost everything that I was looking for. Wolverine has an excellent looking costume and a great sense of scale. I'm not wild about there not being a "Logan" head that I could swap out, and the claws being bent all over the place when he came out of the box. Overall though, this is a Wolverine figure that you will probably want to make room for on the shelf.

Jason's been knee deep in videogames since he was but a lad. Cutting his teeth on the pixely glory that was the Atari 2600, he's been hack'n'slashing and shoot'em'uping ever since. Mainly an FPS and action guy, Jason enjoys the occasional well crafted title from every genre.
@jason_tas
Previous Meet Cable in the first full Deadpool 2 trailer
Next Nintendo Download: Guess “Hoo” is Coming to Nintendo Switch This Week!