Calla Cthulhu is a merging of teenage mentality with the Lovecraft mythos in a fairly typical “hero’s journey” style story.  Whether tailoring Lovecraft’s Elder Gods and monstrosities for a young audience is charming or blasphemous is for the reader to decide.

A teenager Calla Tefari’s parents’ funeral, a strange man asks her about finding the “yellow sign”. That night her parents speak to her from beyond the grave and guide her to find a special magical staff. Fishmen attack her and she is forced to escape not knowing why these monsters attacked her or even existed. Following the advice of her parents and so called “Uncle” Hastur, she arrives at a mysterious mansion on a hill that seems to be rather mystical. Inside she discovers the secrets about herself and the unknown. How she and her uncle are related to Cthulhu. She is seen as the key towards bringing about his return and allowing him and his followers domination of Earth.

The plot of Calla Cthulhu is very standard. The main character is half human, half monster and rejects her initial “call to adventure”. She fights against the expectations Hastur has for her. She realizes that in order to know more about the coming dangers and herself she needs to accept Hastur’s and others’ help and choose her battles. 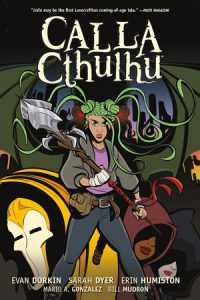 Calla Cthulhu takes the normal teenage book plot and swaps out vampires and wizards for Shoggoths and Elder Gods. The dialogue is decent for the target audience and there’s enough intrigue to keep the story going but it is rough and bland. Nothing stood out as breaking the mold as stories go but for a young adult it may be interesting and a segway into Lovecraft’s world.

A normal teenager suddenly facing a strange new world. Calla wants to avoid her heritage and fight off the monsters and unknown agents now plaguing her world. She’s rambunctious and a fighter – pretty much run-of-the-mill for young heroes these days.

The supposed “man in yellow” who wants Calla to cast off her humanity and accept herself as a vessel for Cthulhu. Hastur is an ancient proud being with great power. He lends his strength to Calla as long as he sees fit and tries to convince Calla that lowly humans are not of any worth to them.

A blue little jelly monster which helps Calla when it can. The blue blob is rather cute but I see it as the mascot character. It gives Calla something to talk to in order to air her thoughts.

Calla Cthulhu has cartoon-like art that kinda looks like Disney’s Atlantis. The backgrounds are very basic initially and gain some details later on. Overall, the art is technically low with backgrounds being flat colors at some points and frames being repeated when needed. The framing and lighting is decent.

Calla Cthulhu is like a cartoon turned into a comic. I’d rather see the story animated since the art and story is so simplistic. I feel the comic is the debut of a fresh young artist new to the industry and lacks experience or technical finesse. I wonder if using the Lovecraft mythos was meant to appeal to fans and market it to them or their children. For older audiences this may be immature and for younger audiences it may be decent.

Better off a cartoon.

Megan here! I am pretty well versed in all things weaboo and geek. I've loved videogames since I was born and even made my own for my 3rd year of Multimedia at the University of Pretoria in sunny South Africa. I have enjoyed anime from the days when Pokemon was considered satanic and Aniplex used to exist on DSTV. In the past couple years I have really gotten into manga, particularly Berserk to see where the story headed after the original anime. If there's one thing I will always love 110% it is cats. Don't doubt my faith in my love for felines.
Previous Sonic Forces to make appearance at Gamescom
Next Marvel vs Capcom Infinite gets everything and a Venom-kaiju in new trailer