Home / Expo / SDCC 2017: Take a break from the Con at Blizzard’s Tavern and Creamery

SDCC 2017: Take a break from the Con at Blizzard’s Tavern and Creamery

Comic Con can be tough on a person. So why not chill at Blizzard’s Ice Cream Citadel, or relax in the Hearthstone Tavern?

Do you like Blizzard? Of course you do. Every gamer loves the company that birthed Warcraft and Starcraft, no? And you know what? They love you too. Well, at least, it seems like they do. That’s because this week at Comic Con, the PC gaming giant is hosting a pair of special attractions in the San Diego area. 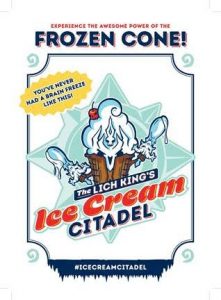 For starters, there’ll be a neat Tavern experience at the Knotty Barrel (844 Market St, San Diego, CA 92101), a local eatery in downtown SD. And when you’re done there, you’ll want to head over to Petco Park (100 Park Blvd, San Diego, CA 92101), to grab some of the Lich King’s best ice cream at the Ice Cream Citadel. Bet you didn’t know old Arthas could whip up a mean frozen treat, did you? Well you do now.

The Citadel is actually open right now, running through Sunday. It’s open from 9am to 9pm, but will close a little early (5pm) on Sunday, the last day of the Con. You’ll be able to grab a “Scourgeberry Sorbet” or “Villain-illa” while you’re there.

As for the Tavern, That’ll be running from 6pm to 10pm on Saturday only. There’ll be some awesome stuff there though, that you’ll want to check out, like the Lich King’s Frozen Throne.

Comic Con is just the best, isn’t it?

Jason's been knee deep in videogames since he was but a lad. Cutting his teeth on the pixely glory that was the Atari 2600, he's been hack'n'slashing and shoot'em'uping ever since. Mainly an FPS and action guy, Jason enjoys the occasional well crafted title from every genre.
@jason_tas
Previous Harold Halibut receives new teaser trailer
Next Rogue Trooper Redux Dropping in October 17