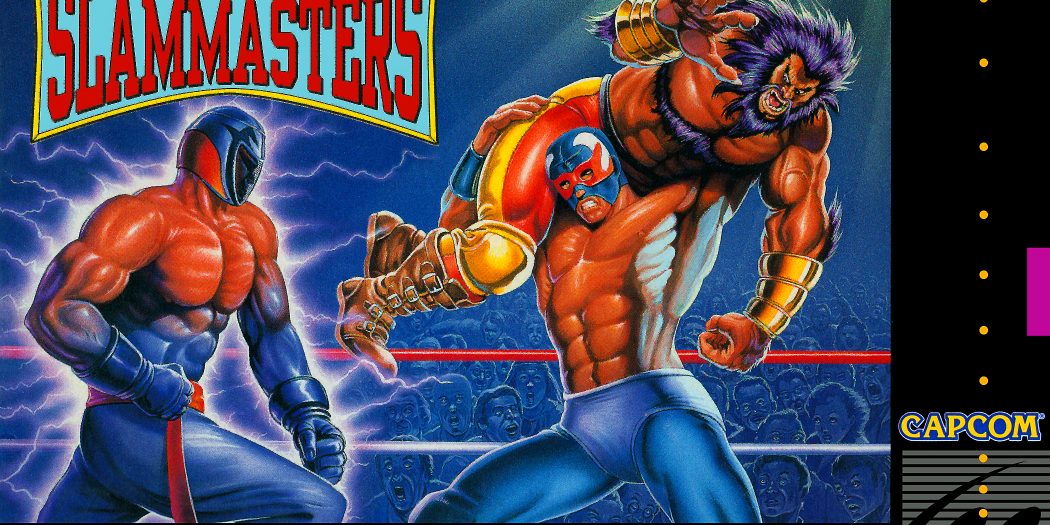 A wrestling game without a license that plays more like a fighting game? Yep, that’s Saturday Night Slam Masters.

The SNES was home to some pretty fantastic wrestling games when you think about it. True, they weren’t the best ever, and they all had that awful thumb annihilating grapple-meter, but they were fun. And you can’t really deny that the WWF-themed titles looked great, and had a nice spread of modes and characters.

So then why would you need to have a game that’s minus all that? Well, I guess you don’t really. But here’s the thing, Saturday Night Slam Masters is exactly that – and it’s a lost gem of a wrestling game as far as I’m concerned.

It seriously seems as though Capcom was looking to make a series out of it too, but it never happened at home for some reason. In the arcades, there were actually a trio of them, including one that was tag team themed. Not on home consoles though. I imagine it didn’t have the sales needed to continue, but I’m not sure.

The influence of Street Fighter is more than a little obvious to me too. The characters are all really well realized, have different fighting styles, and even have pre and post-match quotes. Lots of personality. And Haggar is even in there from Final Fight! Plenty of cool stuff and it seems as though it is a part of the Street Fighter universe.

Yep, there was a lot to love about Slam Masters. But there was actually a lot to dislike too. It kind of all depended on how you looked at it. See, Saturday Night Slam Masters might have looked like a wrestling game, but it was really more of a fighter.

Inside the squared circle

There’s a definite wrestling game here. No doubt about that. Fights in Slam Masters take place in a ring, complete with ropes, turnbuckles, and even entrances with laser-lights and smoke. You can whip off of those ropes too and even leave the ring if you like, just like in the WWE. So it’s got a lot to separate itself from… other fighting games. 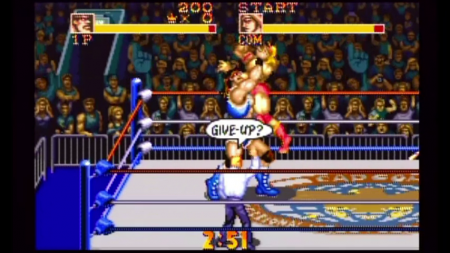 In the ring, controls consist of  punches and kicks, jumps, and grapples. Most all of this is easy to do too, which is a good thing. Physical attacks and jumping get one button a piece, while charging off the ropes requires a simple double tap in whatever direction. The grappling is a little tougher however.

Accomplished with the physical attack button and a direction, you kind of have to catch your opponent just right. While this is true in any wrestling game, it’s tougher to pull off moves here since Slam Masters moves at a quick clip.

If you do manage one though, the moves are pretty sweet. It’s easy to recognize a bunch of stuff that’s appeared in the pros, including gorilla press slams and suplexes.

Once you get your opponent worked down enough, you can then go in for the pin or try for a submission win. Submissions are not the easiest, mainly cause it’s tough to get one on effectively. Pins are easy-peasy, especially if the opposition is sans energy. Then it’s academic to get the 1-2-3.

You might be thinking that this all sounds very wrestling-ish. And it totally does. But it’s that difficulty of grappling and pulling off moves that can easily relegate fights to all punches and kicks.

I played this game a lot with my friends years back, and I can tell you that it happens. Is it a deal breaker? No, it’s not, and Slam Masters still offers a ton of fun if played as a fighter first. It’s just that if you’re looking for a more “wrestling” 16bit experience, then you’re going to want to look to the WWF games.

Oh, and if you’re wondering why I haven’t mentioned match types or modes, that’s because there really aren’t any. All that’s available are traditional one-on-one matches and a Team Battle Royale mode. Honestly, with only eight fighters (plus the two bosses), it’s not much of a battle royale. It still manages to be pretty good fun, though the plain old versus mode is the one that’s my go-to.

I should also mention that the Sega Genesis version of Slam Masters actually replaces the Team Battle Royale (which was in the arcade original) with a different option. There are still only two matches, but the Genesis offers a “Death Match” that apparently has barbed wire around the ring. I’ve never played it though, so I can’t really talk about it at all.

Still, you might want to look it up if you’re a Slam Masters fan, or want something different out of the game. For the record, the Genesis version also allows you to play as the bosses in solo matches. That’s not something that the SNES edition has.

The pop of pyro and the sounds of the arena

In the AV department, Slam Masters is kind of a mixed bag. It’s mostly a plus, but there are a few little minuses in there too.

The graphics are great, and cast in that signature Capcom style. Big characters, decked out in colorful outfits are the highlight. The actual wrestling moves are great looking as well, with plenty of mugging for the “camera” going on. Showmanship is a decent part of pro wrestling after all.

The arena’s though, aren’t nearly as entertaining. In fact, they all look similar and lack the glitz of a modern pro event. As for the sounds… meh.

Audio in wrestling games is almost unnecessary, and Slam Masters is a solid example of that. The entrance music is forgettable, and the tunes that play during matches are only a little bit better. Effects are likewise only okay.

All of that adds up to a package that’s decent enough, but not going to wow anyone in the current time. Actually, it didn’t exactly “wow” anyone in the 90s either.

Graphics that take the title belt - 86%

Why is it so hard to do wrestling moves in this wrestling game?! - 64%

Saturday Night Slam Masters is a unique game for the SNES. On the one hand, it's got originality going for it. It's the only home game of the series, and a different track for Capcom, who certainly wasn't known for wrestling games. On the other, it still retains most of the Capcom magic that can be found in the company's long running Street Fighter series. At times, the game simply doesn't seem to be able to tell what it is though, where the fighting game ends and the grappling begins. Either way, it's a fun time that basically works out to be a slower paced fighting game. I just wish it was less that and more of a wrestler.

Jason's been knee deep in videogames since he was but a lad. Cutting his teeth on the pixely glory that was the Atari 2600, he's been hack'n'slashing and shoot'em'uping ever since. Mainly an FPS and action guy, Jason enjoys the occasional well crafted title from every genre.
@jason_tas
Previous Valkyria: Revolution video gives insight into game’s soundtrack production
Next New this week from DST: Ghostbusters, Batman, Marvel, and more